Do Low-Fat Foods Make Us Fat? 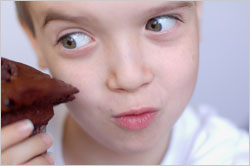 Collect This Article
3.0 based on 4 ratings
by Education.com

Unhand that low-fat brownie! Resist that baked potato chip! A new study shows that reduced fat food may be making us fat.

Cornell University students took to the streets to test America's eating habits – infiltrating movie theaters, holiday receptions, and homes to see just what's packing on the pounds. What they found, is that Americans eat an average of 28% more total calories when they know a snack is low-fat, rather than regular.

"People don't realize that low-fat foods are not always low-calorie foods," says Brian Wansink, PhD, in his book, Mindless Eating: Why We Eat More Than We Think. Less fat often means more sugar – manufacturers pack it in to make the foods more appealing. And just because something says "low-fat," doesn't mean it's a free pass for gluttony. Low-fat munchies are an average of only 11% lower in overall calories, but people wrongly assume they are about 40% lower.

In one of the Cornell studies, two groups of people attending a holiday open house, were given identical regular chocolates, but half were told that they were "regular" and the other half that they were "low-fat." The second group ate an average of a third more candy – which would have translated into 28% more calories if they had actually been low-fat.

People tend to feel less guilty when they indulge in low-fat foods. And they eat more, even if the "skinny" versions don't taste as good as the originals. As these studies show, they'd be better off eating the good stuff, just eating a little less of it.

So the next time someone passes you a box of truffles, go ahead, pop one into your mouth. Just don't pop in six –low-fat or not.