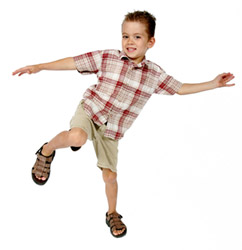 Collect This Article
3.4 based on 8 ratings
by Education.com

A parent can only listen to so much Old MacDonald, before being sorely tempted to bang his or her head repeatedly against the stereo. True, music is a vital part of childhood. And true, studies have shown that it can even make your kid smarter. But does it really have to sound so grating? The answer is – no. There's a crew of musicians out there making music that not only won't make you crazy, you may even actually like it.

For those not quite ready to give up Coldplay or U2,  Barney and The Wiggles, listen up! We've got four artists who give kids' music a good name. These CDs are road trip ready. Strap the kids into their car seats and take a listen. But be careful, this is the good stuff – you may just find yourself singing along at traffic lights.

Every Day Is a Birthday by Brady Rymer (Bumblin' Bee Records). Parents who shop in the alt rock section will feel right at home with Brady Rymer, a former roots-rock musician who's made the switch to children's music. We especially loved the title track, which describes all the kooky ways birthdays are celebrated across the world, and "Keep Up With You," a breakneck tune about a kid who runs his parents ragged. Rymer is the real deal –- he shared the stage with the likes of Bob Dylan and Dave Matthews before parenthood brought him off the road. This CD holds all the wonder of the best children's music, with some of the soul of your favorite pre-parenting favorites.

Catch That Train by Dan Zanes (Festival Five Records). The cat is apparently out of the bag with Dan Zanes. His music is regularly featured on Playhouse Disney, and he was just nominated for a Grammy. For those parents who've yet to be initiated in all things Zane, we suggest this album. Like Brady Rymer, Zanes is a rock band retiree (he used to sing lead for the band the Del Fuegos), and he can jam up a storm on everything from a harmonica to a ukulele. This album makes making music sound like incredible fun and the lyric book even includes the chords for each song, in case you or your kids are inspired to pick up an instrument and play along. Zanes was one of the first to give children's music true cachet, and guest appearances from Natalie Merchant, Nick Cave, and the Blind Boys of Alabama make this CD even better.

Fins and Grins by Johnette Downing (Wiggle Worm Records). Bonnie Raitt, move over! There's a new(er) blues belter in town. And she's easy on the ears. New Orleans singer-songwriter Johnette Downing has a velvet set of pipes, but instead of using them to sing of men who've done her wrong, she's belting out tunes about penguins and stingrays, crawfish and hermit crabs. Still, backed by Jimmy LaRocca of the Original Dixieland Jazz Band on trumpet and Bruce Daigerpont on Cajun accordion, you can almost imagine kicking back for a listen with a bowl of gumbo at a café in the French Quarter. She does Louisiana's long tradition of Creole, Cajun, and Zydeco proud.

Taxi by David Weinstone (www.musicforaardvarks.com). Jon Stewart, Philip Glass, and Helen Hunt have all discovered David Weinstone. So have members of the rock groups Phish, Sonic Youth, and The Beastie Boys. They all took their kids to his "Music for Aardvarks and Other Mammals" classes in New York. Now, even parents who've never walked the red carpet can get a taste of his hipster approach to kiddie music. Forget bunnies, bears, and farms. Weinstone sings about taxis, subways, and bagels. This is music for city kids – hold the sugar. But any kid, urban or suburban, will enjoy the CD's crazy rhymes, irreverent topics, and unexpected melodies. There's no singing down here – to kids or to parents. And if a sense of humor can be taught, this CD should be on every kid's syllabus.

Next Article: Music Education for Kids: Does Music Make Kids Smarter?
We enable strictly necessary cookies to give you the best possible experience on Education.com.Cookie policy