Martial Arts for the Younger Set 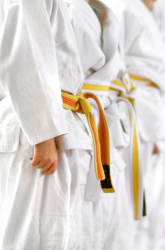 Jet Li, Jackie Chan, and Crouching Tiger, Hidden Dragon may have brought martial arts into our living rooms, but this ancient art is no passing trend. And it can do wonders for children – not just physically, but mentally as well.
“A lot of kids are really shy when they come in,” says Richard Branden, a world champion in kung fu, former stunt cast member of the Power Rangers, and owner of Studio Kicks in Palo Alto, California. “Martial arts builds their confidence and their discipline, not only in this school but in regular school as well.”
Fans say that practicing martial arts not only strengthens the entire body, but improves coordination and encourages patience and self-mastery as well. It’s a sport that can also be a form of artistic expression, a great way to channel aggression, and an option for kids who want to compete but aren’t cut out for team sports.
When to start? “The earlier, the better,” according to “Sensei” Michael Bruce, owner of Jonin Ryu Ninjutsu across town from Studio Kicks. According to Bruce, preschoolers’ classes focus on large motor movement, because most children won’t be ready to learn technique until 6 to 8 years old.
Bruce suggests that young children start with karate or tae kwan do, since both can provide a great foundation, even if the child later switches to another form of martial arts. Karate helps develop whole body strength and agility, and is considered a sport, self-defense, and an art. Tae kwon do is the world’s most popular martial art and is featured in the Olympics. More than a system of self-defense, it’s an art that helps develop physical grace and coordination.
Branden teaches kung fu to preschool and older kids, although he agrees that the ideal age to start is probably 6 or 7. It requires patience, discipline, and strength to excel at kung fu, which requires low stances and strong blocking.
Older kids might be ready to try the ancient art of jujitsu, judo or aikido. Judo is a Japanese form of jujitsu that resembles wrestling. The focus is not only on the art itself, but on the health of the whole body. Aikido is a deeply philosophical art. Practitioners win not by throwing kicks or punches, but by using the opponent’s own strength against them, à la Steven Segal.
What type is right for your child? A lot will depend on the teacher. Observe a few classes to get a feel for the instructor’s style and enthusiasm for working with young people. Does the school’s philosophy mesh with your child’s goals and temperament?
“A lot of schools pass out belts like candy. There are 7-year-old black belts,” says Branden. “When kids in our program earn something, they know it’s right.”
Chances are, when you find the right class for your child, you’ll know too.
Next Article: Promoting a Cause Through Social Networking
We enable strictly necessary cookies to give you the best possible experience on Education.com.Cookie policy