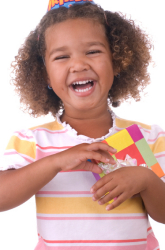 Can a preschooler teach herself to read? Can a boy in kindergarten cut his own apple with a real knife? Will young children, left to their own devices, choose activities that will enrich their minds?

In 1907, an Italian woman named Maria Montessori opened the doors of Casa dei Bambini, or "Children's House" – a new type of school based on the concept of child-centered education. She took children no one else wanted to teach and created a school that would engage them in purposeful activities, rather than sit them down and feed them information. It was the beginning of a revolution in early learning. This year, the Montessori approach celebrates its 100th birthday with events across the country, and the world.

Maria Montessori was one of Italy's first female physicians. She helmed the anthropology department of the University of Rome. But she gave it all up to focus on her one true passion – exploring the way that children naturally learn, and creating an environment that catered to their needs.

Montessori started with one school and 60 children of Italian working parents. Today, there are more than 8,000 Montessori schools worldwide – 5,000 in the U.S. alone. And while in recent decades the approach has been most popular with Middle Class white parents, it's gaining major momentum in low-income public schools, especially in the African American community.

"One test of the correctness of educational procedure is the happiness of the child," Maria Montessori said. Her classrooms were built based on the idea that "children teach themselves" and that adult guidance should be kept to a minimum. Montessori classrooms are chock-full of manipulatives – puzzles, blocks, and wooden toys that children can choose for themselves. Older children help younger children. And students are free to actively move about the classroom.

Many of Montessori's techniques and beliefs are now considered mainstream – most notably the idea of unstructured class time. But her contention that pretend play is a waste of time is still much debated today. From a Montessori perspective, a child is a capable being, able to recognize that a feather duster is not a magic wand. If she waves the feather duster in the air, chanting spells, her teacher will gently show her how to dust with it, as this is its "proper" use. Even the youngest child, Montessori schools believe, is capable of using it correctly. To Montessori's detractors, telling a child that a feather duster is for dusting is not empowering the child, it is squashing her imagination.

Whatever your belief, there's no denying that the Montessori approach has greatly impacted a generation. Her belief that every child, regardless of ethnic or economic background, is capable of learning, changed the face of education. Most likely, at least a few of Maria Montessori's ideas have crept into your child's school. She was one of the major educational pioneers of the last century. So Happy Centennial, Montessori! Here's to another 100 years.