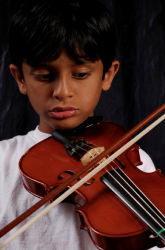 Two-year-old Carlos recognizes colors and letters, whips puzzle pieces into place, tells time, and has an attention span to rival his 10-year-old brother’s. Without a doubt, the little one is displaying early signs of giftedness. Mom and Dad anxiously await his first day of preschool so they can question the teacher about how to keep him challenged and moving forward. And why not? Any parent would be proud.
Unfortunately, sometimes pride gets in the way of recognizing the potential potholes of labeling a child too quickly, without the luxury of professional guidance. Psychologists and educators who specialize in diagnosing giftedness in children are in agreement: It is wise for parents to take it slow when navigating the genius highway. The road can be fraught with misdiagnosis, learning disabilities, sleep disorders, social ostracism by peers, and problems within the family structure. And a wrong turn can harm a child’s emotional, psychological, and physical development.
A smooth ride through the gifted child maze is possible. Parents who travel with eyes-wide-open, awareness, and most important, sensitivity to the needs of their child, will arrive at their destination less for the wear. Below are some tips to help parents prepare an arsenal of information in order to act as an advocate for their child:
Pre-testing. Before engaging in IQ testing, have your child’s physical and psychological health assessed. Some gifted children are “twice exceptional,” meaning that they have learning challenges in addition to their intellectual abilities. Hidden learning disabilities include: auditory processing weaknesses, problems with visual perception, writing disabilities, spatial disorientation, and attention deficits.
Awareness of medical terminology. Gifted children are often misdiagnosed. Common mislabeling includes: Attention Deficit Disorder, Oppositional Defiant Disorder, Mood Disorders (Depression/ Bipolar Disorder), Obsessive-Compulsive Disorder, and Asperger’s Disorder.
Acknowledge your child’s habits. One common problem for gifted children is sleep disorders, such as nightmares, sleep terror disorder, and unusual sleep patterns (a need for too much or too little sleep). Don’t ignore the signs. A good night’s sleep is vital for school success, as well as overall well-being.
Recognize unusual behaviors. Know the difference between age-related behaviors and those out of the ordinary. Many gifted children have relational problems such as willfulness, mischievousness, strange, or odd behavior, extreme intensity or sensitivity, and temper tantrums. Help your children learn to act appropriately, but be mindful of their needs.
Appreciate the help available. Remember, there is assistance out there. You aren’t alone. Gifted children need challenge, but they also sometimes need professional guidance to help them interact in the mainstream world, and a supportive, understanding environment.
Next Article: Gifted Programs: Luxuries or Necessities?
We enable strictly necessary cookies to give you the best possible experience on Education.com.Cookie policy