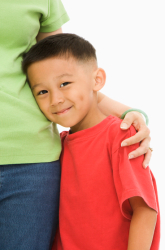 Collect This Article
3.5 based on 4 ratings
by Education.com

In every group there’s always at least one of them – the outgoing, friendly child who smiles brilliantly and engages even perfect strangers with her exuberance and energy. She is the organizer, the team captain, and because she is noticeable and engaging, she makes friends easily.

But for every outgoing child, there is also the one who plays quietly by herself, who seems content to be left alone and to not join in on the group’s activities. Sometimes, teachers or other children mistake her for a loner, when in reality, she’s just shy.

For parents of a shy child, it can be daunting to navigate how to help a child deal with social situations such as playgroups, school, or even being in an unfamiliar environment. But according to Karen Stein, an Early Childhood/Parent Educator in Palo Alto, CA, shyness doesn’t have to be a problem. “We think of shyness as being anti-social,” she says, “and we never think of it in a positive way. But a shy child is an observer rather than a participant, and there’s absolutely nothing wrong with that.” According to Stein, if parents think of shyness as a problem then they will try and solve it and that’s where the pushing starts.

“If you push too much, then the child will become anxious,” she says. In her preschool classrooms, Stein makes it a point not to make children join in if they aren’t comfortable. “The key is to let the shy child take his time. If he wants to sit and play by himself, that’s OK. The important thing is that if he’s in a group dynamic such as a playgroup or preschool, he feels comfortable and understood.”

Pushing a child to be something or do something out of his comfort zone can backfire, so it’s important to read his signals and give him options that will help him acclimate to different situations. Transitioning a shy child from preschool to kindergarten can be a particularly tough change.

According to Susanne Ayers Denham, Ph.D., a school psychologist and author, there are a few techniques parents can use to help shy children make that transition to kindergarten, without pressuring them.

While Denham says it may be tempting to push your child, don’t. Some gentle pushing is OK, but you never want to overwhelm a child. She’ll eventually settle into the new routine, even if it takes her a bit longer than others.

Though a quiet, thoughtful child may not get as much attention as the outgoing, high-spirited child, her approach to life is just as significant and meaningful. Respect your child’s limits. They may be slow to warm to something new, but often it’s worth the wait!

Next Article: Encouraging a Shy Preschooler to Participate
We enable strictly necessary cookies to give you the best possible experience on Education.com.Cookie policy