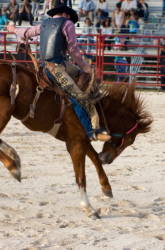 Move over, baseball. With roots in the Wild West and heart-stopping displays of bravery and bravado, rodeo is as all-American as a sport gets. The Lone Ranger may have gone the way of Howdy Doody, but there’s something about horses, cowboys, and cattle that brings out the “git up and go” in all of us.
With its roots in the early West, modern rodeo is as close to time-travel as most of us will ever get. It all started with the vaqueros on Spanish-owned ranches in the Southwest, who learned to rope, ride, brand, and round up cattle. By the end of the Civil War, the cattle business was booming, and land barons had established ranches throughout the West. After long cattle drives to dusty cow towns, the young cowboys – contrary to stereotype, many of them of African and Hispanic descent – would hold competitions to show off their roping and bronco busting skills.
By the end of the 19th century, the Indian wars were over, and the West was won. Buffalo Bill took his Wild West Show on the road, and the American cowboy was firmly established as an American icon.
Today, the person wearing a 10-gallon hat and boots while roping a steer is as likely to be a cowgirl as a cowboy, and riders compete for serious prize money. But one thing hasn’t changed: a rodeo is still a great place to find some all-American entertainment and a glimpse into our past. Odds are that no matter where you live, you won’t have to go to far to find one. Here’s a sampling from around the country.
For more information, or to find a rodeo near you, visit www.prorodeo.org (The Professional Rodeo Cowboys Association).
Next Article: Kid-Friendly Art Museums
We enable strictly necessary cookies to give you the best possible experience on Education.com.Cookie policy