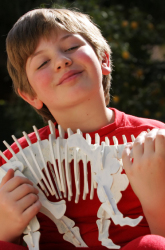 Does your boy love brachiosaurs? Does your girl know everything about the gallimimus? Do you not like a certain purple dinosaur? Then try these dino-themed songs. They might make your kids dance like prehistoric beasts, but they won’t test your aural sanity.

Every kid goes through at least one period of mild obsession, be it trains, princesses, firetrucks, or fairies. And dinos rank right up there with the best of them. But you can use their cult-like fervor to teach them something about those giants that roamed the earth way before we came around. And you can ignite a passion for music at the same time, by using some fabulous tunes to do it.

Here are 13 candidates to get you started. Not surprisingly, many of these songs encourage kids to roar and move around. Others use dinosaurs as a jumping-off point for themes like tolerance and exploration. If you’re ready for some prehistoric fun, here are a few gems to try:

"You're a Dinosaur,” Monty Harper – This song not only rocks but also gets down to the nitty-gritty with a plethora of lesser known dinosaurs. Sure, there’s a shout-out to the well-known triceratops and stegosaurus, but dinosaur side notes like hadrosaurs and seismosaurs get some play here, too.

"The Dinosaur Song,” Gunnar Madsen – A story song that wouldn't be out of place in a Broadway show, this one features lots of details about one of the biggest dinosaurs of all, the brachiosaurus.

Dinosaurs as Characters (or Pets):

"Brontosaurus Got a Sweet Tooth," Justin Roberts – Clearly not the most paleontologically accurate song on this list. Brontosaurs don't actually exist and their views on cookies remain a mystery, but use this as an opportunity to discuss how sometimes science disproves things previously thought as true.

"Dinosaur Rumble," Ralph's World – A sweet pop tune about how cool (mostly) it would be to have a dinosaur. A really big dinosaur.

"Dinosaur Song," Johnny Cash – The Man in Black takes a crack at a slew of carnivores and herbivores. Diplodocus, triceratops, brachiosaurus, and others all get coated in that imitable voice as Cash muses what it would be like to have one as a pet. Better or worse than a dog?

"I'm a Little Dinosaur," Jonathan Richman – Not written specifically as a kids song, but Randy Kaplan turns in a gently swinging version which addresses (but doesn't answer) the question of where the dinosaurs went.

"If I Had a Dinosaur," Raffi – A gentle folk song in Raffi's sweet voice about what a young child might see or do with a dinosaur.

"We Are the Dinosaurs," Laurie Berkner  – If there's any kids song, dinosaur-related or otherwise, from the past 10 years that your grandchildren will be singing – and stomping – to your great-grandchildren, this is it. A simple, but potent sing-along.

"Predator Dinosaur," Uncle Rock – A roots-rocker that encourages kids to roar their way around the living room, pretending to be a Tyrannosaurus rex or raptor.

"I'd Be a Dinosaur," Mr. Ray – Another one for kids who want to channel their internal Tyrannosaurus Rex. More pop in nature than "Predator Dinosaur."

"We Can All Get Along," The Terrible Twos – Any tune that features two songs buying a house in a neighborhood isn't going to satisfy the more scientifically oriented of dinosaur nuts, but this sweet indie-pop song teaches a lesson of tolerance.

"Diggin' Up a Dinosaur," Brady Rymer – The name is a bit deceptive. This one’s not so much about dinosaurs but about kids discovering what it is that they really love to do – be it drawing pictures, riding horses, or, well, digging up dinosaurs.

The next time you’re looking for a new spin on your child’s dino-obsession, pop one of these songs into the CD player. They may not be as factually accurate as the encyclopedia gathering dust on your shelf, but they’re certainly more fun. And who knows, with all that talk about herbivores, you may even find a way to motivate someone to eat their vegetables!

Next Article: Why Children's Theater Matters
We enable strictly necessary cookies to give you the best possible experience on Education.com.Cookie policy