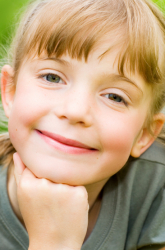 Want to help your tween become a confident, creative, young man or woman? Give them a pen and paper, says Michele Dominguez Greene.

If you saw her face, you might recognize her – the Emmy-nominated actress had a stint on LA Law and is now a regular on David Mamet's CBS series The Unit. But when the cameras are off, Greene focuses on her other passion – teaching young people how writing can change their lives. Her novel, Chasing the Jaguar (Harper Collins), was nominated by the American Library Association for the 2007 Best Books for Young Adults Award.

Greene says, "Everyone is a writer, whether they know it or not. Whenever you tell a friend a story, you are writing." Writing is important, especially for teenagers and adolescents, she says, because it gives distance and perspective. "Being a teenager is like being in the spin cycle of a washing machine," and by writing down what they're feeling, teens can record raw emotions, then look back at them later and realize what has changed.

So what can you do to help them along? Here are Greene's tips on helping your child find their voice:

Give Them a Journal: Writing without the aid of a computer helps kids improve grammar, spelling, and vocabulary. But it also develops tremendous life skills. It teaches kids to see on a page how they think. Give your child a journal and keep one yourself. Let them know that their journal is theirs alone, and that you will never read it, but clue them in on some of the things you're writing about. "It's important for children to know that their parents are human, that they struggle with things, too, and that they have faults," Greene says. As they near adulthood, you want them to begin to relate to you as a person, not just a parent.

Observe on the Fly: There are stories everywhere, Greene says. "The next time you're out with your child doing mundane errands, observe. Ask your child while you stand in line at the bank, 'What do you think that man's story is?' You'll be amazed at the astute things they come up with. Observing makes boring tasks more fun and it teaches kids a sense of storytelling."

Do More Than Talk: "Parents are always telling kids what to do," Greene says, in the hopes that they'll create a great adult. "It's not enough to tell them, you need to show them. If you want a child to develop social consciousness, well then take them to a shelter on Thanksgiving and serve dinner. If you want them to write, write yourself. They learn by example."

Encourage Them to Write Their Story: Journaling is great, because it allows kids to vent. But Greene says that when kids take it to the next level, that's when the real magic begins. "Teens start to see themselves as a character. They write about things they never even realized they had in them. This is an age of powerlessness and there's a tremendous sense of power in creating a story because you realize that you can make the characters do anything you want. And eventually teens realize, I can write the story of my own life any way I want, too."

Next Article: Early Art Exploration
We enable strictly necessary cookies to give you the best possible experience on Education.com.Cookie policy