Log in with different email
For more assistance contact customer service
School and Academics
Bullying and Teasing
What Makes a Bully?

What Makes a Bully? 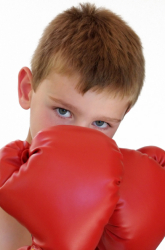 Say the word “bully” and most people think of a thug. Nobody likes him, but his ability to frighten other children makes him somehow larger than life. Fortunately, so the myth goes, he’s also very rare.

Well, say some leading researchers and school violence prevention specialists, think again. Bullying, they say, is complex behavior. Just about any child may be drawn into it, and over the course of childhood, almost all kids are affected.

For the last twenty years, the Seattle-based international nonprofit, Committee for Children, has studied school violence and has developed anti-bullying programs currently used in over 25,000 schools in 21 countries. Here are a few bullying myths, and what they have to say about them:

Myth: Bullying is rare and extreme.

Fact: Over the course of a year on a typical school playground, 77 percent of kids have engaged in bullying either by doing it themselves, or watching and allowing it.

Fact: Most children who bully have average or even high self-esteem. They bully, says Dr. Miriam Hirschstein, Ph.D., a research scientist with the Committee for Children, “because they believe they will get social mileage out of it.” As a related fact, 85 percent of bullying incidents involve bystanders. “Bullying,” she says sadly, “can help you be a very popular child.”

Fact: While physical attacks are still done mostly by boys, researchers have found that “interactional” bullying –taunts and name-calling – is every bit as damaging, and done just as often by girls. Girls dominate a final category called “relational” bullying – using a group to “freeze out” or otherwise humiliate another child.

In other words: under the wrong circumstances, that bully could even be your kid. Here’s the good news. Over the last decade, schools have teamed up with professionals to stop the cycle, by setting firm consequences for bullying. Many states across the country have even passed anti-bullying laws.

Early education is key. And schools are taking playground problems more seriously than ever. Many school programs, including the Committee for Children’s “Steps to Respect,” include elementary curriculum on social problem-solving skills, which can prevent violent behavior patterns from taking hold.

No one wants to raise a bully. And no one wants to have a child taunted by one. If you suspect that your son or daughter may be bullying, bystanding, or becoming a victim, talk to your teachers and school leaders immediately. In today’s climate of awareness, you can expect to be heard.

Next Article: Social Life in Middle and High School: Dealing With Cliques and Bullies
We enable strictly necessary cookies to give you the best possible experience on Education.com.Cookie policy