When Your Kid Wants to Quit the Team 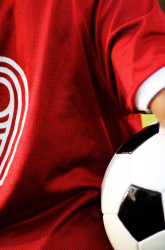 It’s 8 AM on a Saturday morning and your child’s Little League game starts in ten minutes.  Sure enough, the house is a mess of flying gear, but the glove you need is nowhere to be found.  It’s a relief when your child says, “Can’t I just QUIT?”
Sports can be a great way for kids to test their limits, improve their patience, and learn the meaning of teamwork. But sometimes a particular sport or team is just not a good fit.
So when is it okay for kids to cut and run? When is it okay for them to throw in the towel and pack up the gear? We consulted Positive Coaching Alliance (PCA), a countrywide network of coaches and athletes whose National Advisory Board includes such sports legends as football player Ronnie Lott. PCA has spent the last decade promoting teamwork and character in youth sports.
Not surprisingly, the organization urges parents to remember why they got their kids involved in the first place-- sports have value, not just in spite of hard challenges but because of them.   As Executive Director Jim Thompson likes to say, “Sports is an endless procession of teachable moments.” Don’t let your kids quit, he says, just because the going gets tough.
Still, says spokesman David Jacobson, while quitting a team or a sport is a last resort, once in a while it may be necessary. Here are three potentially good reasons:
So the next time you find yourself on your belly, fishing under the couch for mouth guards, try to resist the urge to give up.  For adults and kids alike, sports offer plenty of curve balls—and plenty of chances to learn to hit them in stride.
Next Article: Navigating Youth Sports
We enable strictly necessary cookies to give you the best possible experience on Education.com.Cookie policy