Log in with different email
For more assistance contact customer service
Child and Adolescent Development
Identity
Emo and Goth: What's It All About

Emo and Goth: What's It All About 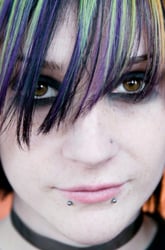 It started with angst-ridden, poetic music. Then came the black clothes. And what is up with the dyed hair, asymmetrical haircut and theatrical makeup?  Call it Goth, call it Emo, call it whatever you want--it doesn't matter. Teenagers attempting to individuate themselves is a rite of passage, one that all parents passed through on their way to adulthood.  But today's teenagers are trying on new identities in some visually extreme ways that make some parents nervous. Should they really worry?  The answer to that question really depends on knowing your child and a little about the teenage counterculture he's chosen as a way to express himself. What is Emo? Strangely enough, the term "emo" began not as an identifier, but as an insult. It's an abbreviation for a type of music known as "emotive hardcore," which has been facetiously described by some as "punk music on estrogen."  Though kids who belong to the Emo counterculture can be identified by a unique fashion sense, it's more likely that your teen relates to the music and mindset of Emo. "The songs are yearn-y and sad, which kind of fits into the way teenagers feel," says Rebecca "Kiki" Weingarten, M.Sc.Ed, MFA, Parenting Coach and Co-Founder of Daily Life Consulting. "The Emo really is more benign in a way. It's more about the expression and the music," she explains. According to a popular Emo website, Emo Corner, the shaggy or spiky hairdos, the multiple piercings and the thrift store clothing are simply a way to express how you're feeling, as is the emotionally-wrought music and musing-of-life poetry that is such a big part of the counterculture. What is Goth? Goth is little more extreme than Emo, both in dress and ideology.  Many Goths explain that they feel hemmed in by society's rules and feel stifled as free thinkers. In line with the literary genre (19th century Gothic) that inspired the name, Goth teenagers tend to dress in Victorian-era clothing and use makeup to attain a pale and mysterious look.  Daniel Buccino, a Director of the Baltimore Psychotherapy Institute and an Assistant Professor in the Department of Psychiatry and Behavioral Sciences at Johns Hopkins Bayview Medical Center, thinks it's the extremity of this look that makes parents nervous, but notes that teens are just trying to individuate. It's definitely age-appropriate for teenagers to try to find their identities, and one way they do that is to literally "try on" something different.  Weingarten says that kids who try out Goth as a peer group may be artistic rather than athletic and use the clothing as a visual medium of expression. However, for many adults, that visual expression can seem threatening. What, Me Worry? The question remains: Should you worry if your child has chosen such an extreme way to express his individuality? Buccino doesn't necessarily think so. "Just because a kid is Goth and wearing black doesn't necessarily mean he's depressed or suicidal," Buccino says. He rightfully points out that self-endangering behaviors aren't limited to the more visible countercultures. "Jocks can drink and cheerleaders may have anorexia--which is potentially more dangerous," he says. Weingarten, on the other hand, thinks it's worth keeping an eye on. "In a way," she says, "I can't really blame any parent for saying 'it's really freaking me out.' I do think it's cause to really look at and say why choose a way where you are alienated from and alienating most of the mainstream groups." In terms of whether a parent of a teenager who identifies himself as Emo or Goth should be concerned, it's really not the outward appearance that matters so much, it's whether the behavior is a huge departure from the norm for your child.  This is where knowing your own child has real benefits.  "Be attuned to your children," cautions Weingarten. "Listening to the depressing music and trying it out once in a while is OK, but the problem is, will it develop into something more?" Some teenagers try out a number of different identities in an attempt to separate themselves from their parents and, once they find one that feels comfortable, settle into a routine with friends and family. Some teenagers try out extreme identities as a way to get parents' attention and test the limits. Either way, there's nothing wrong with telling them how you feel about their new look. In fact, though she knows it's not always the most popular viewpoint, Weingarten says that's your job as a parent. "You're not there to be their best friend, that's not your role," she says. "Your role is to set boundaries and help them navigate the world."