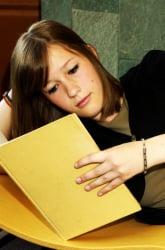 “Graphic novels entice students to read because they think of them in the same way they think of video games. Visuals enable students to comprehend and infer from the text,” says sixth grade teacher Donna Kasprowicz, who integrates Yang’s work into her curriculum.

Publishers have transformed classics, from Nancy Drew to Crime and Punishment, into graphic novels in order to foster visual literacy, accommodate different learning styles, and introduce literature otherwise avoided. (A slim version of Remembrance of Things Past comes to mind!)

The genre is extensive, tackling ambitious themes of adolescence, war, and politics. Here are samplings from this graphic universe:

For other great resources, check out these websites:

No Flying, No Tights: www.noflyingnotights.com

Next Article: Five Steps to Fostering Reading Fluency
We enable strictly necessary cookies to give you the best possible experience on Education.com.Cookie policy