Factoring in the Achievement Gap 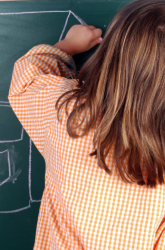 Why do certain students struggle at school? The question isn't new, but it seems like the answers are always changing: lack of motivation, poor preparation, low expectations, and teacher quality have all caught some heat for low-achievement in schools. But what if there were factors outside the school that contributed to a lag in learning so severe that some students could never hope to catch up? According to a new study by the Educational Testing Service (E.T.S.), underachievement in school, and particularly the so-called “achievement gap,” could have more to do with what happens on the home front than anything that goes on within school walls.

The study took four factors that are completely out of the control of schools, and found a staggering correlation between them and school performance. Those factors were:

Using these factors alone, researchers were able to forecast student performance in school with surprising accuracy. “We were able to quite closely predict state reading scores based on these factors,” says Richard Coley, director of policy information at E.T.S and co-author of the report. That means that external elements like TV time, family structure, school absence, and preschool story-time may have more of an effect on long-term student achievement than classroom instruction, test preparation, class size, and other in-school factors.

But before you rush to switch off the TV and mend fences with your ex, keep in mind that these four factors are part of a larger phenomenon plaguing the education system. This would be the so-called achievement gap, an academic disparity between students of different socio-economic backgrounds that can sometimes prove insurmountable. “Poor students as a group start out with a disadvantage over students from more affluent families because they come to school less well prepared,” says Jack Jennings, President of the Center on Education Policy. The four factors used by E.T.S. researchers are all tied to the problems faced by lower-income families. For example, because parents may need to work longer hours, parent-child interaction goes down and TV time goes up. And these circumstances can make a big difference down the road. “Studies have shown that students from different economic backgrounds advance at the same rate during schooling, but poorer students as a group never overcome their initial disadvantage,” says Jennings.

“Children are starting out from very different platforms,” agrees Coley, “and teachers don't have a magic wand to make all those platforms equal.” He points out that with academic buzzwords like standards and accountability flying around, it's easy to lose track of the simple fact that kids are starting kindergarten with a serious handicap that they may never overcome. Says Coley: “If we were really serious about closing the achievement gap and raising the academic levels for all kids, we would start paying as much attention to the starting line as we are to the finish line.”

But the good news is that it doesn't take much to get your child headed in the right direction. So take the night off from prime-time to spend some story-time with your child - it may make a big difference in the long run.

Next Article: Do Afterschool Programs Give Students a Boost?
We enable strictly necessary cookies to give you the best possible experience on Education.com.Cookie policy