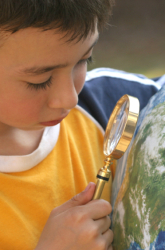 The next generation of cosmos explorers is growing up right now, looking up at the sky and wondering not only, “What’s out there”, but also “How can I go up and see it?” If you're a parent looking to foster an interest in all things interplanetary, you're in luck: although the gold standard for a space event is probably seeing a shuttle launch at the famous Kennedy Space Center in Florida, there are other places to peak into the heavens with NASA.

Virginia Air and Space Center, Hampton VA This is the official welcome center for NASA’s venerable Langley Research Center, an aeronautics laboratory since 1917. The Adventures in Flight gallery teaches the history of aviation development and features a replica of the Wright Brothers 1903 Flyer and a series of virtual reality simulators, including “wing-walking” on a 1920s Jenny biplane. SpaceQuest interactive exhibits explore “the Moon, Mars and Beyond” with a Lunar Landing Module and Mars Rover.

Stennis Space Center, Bay St Louis MS Start with a walk under an Apollo lunar module at the visitor’s Launch Pad, then take a narrated bus tour through NASA’s rocket propulsion testing complex. The StennisSphere center invites kids to explore enormous rocket engines and a mock-up of the International Space Station. Prospective astronauts can even climb into a simulator to test-fire engines or practice landing the space shuttle!

Ames Research Center, Moffett Field CA Located close to the Silicon Valley innovation hub, Ames focuses on supercomputing, networking and information technology. The NASA Exploration Center features a “you are there” curved-screen theater showing movies and images, like panoramic views of Mars and the rings of Saturn. Other exhibits include a topographical globe of Mars, lunar samples, the Mercury Redstone 1A capsule and the “Edgarville” interactive airport, where kids can practice their air traffic controller skills in 3D.

Glenn Research Center, Cleveland OH Named for Ohio native John Glenn, the first person to orbit the Earth, this Center conducts research on planetary exploration, space propulsion and communications technology. Six exhibit galleries include the Apollo Command module used on Skylab 3, the Aero Adventures interactive flight simulator, a tribute to Glenn’s historic Mercury flight and a life-sized model of Sojourner, the Mars rover. Special events every third Saturday of the month give unique insights into topics like the Constellation program to return humans to the moon, the Phoenix mission to Mars and the Hubble telescope.

Johnson Space Center, Houston TX Mission Control is the astronaut’s communications lifeline back to Earth and an exciting experience for Bayou City visitors. Kids can learn about space station daily life (and run around to burn off a little cosmic energy) in the Kids Space Place giant playscape. Next, settle into the Space Center Theater’s five-story tall movie screen to be immersed into the real life of an astronaut, from the start of training to floating weightlessly in space during a shuttle mission. Another theater simulates spacecraft blastoff sensations and updates the audience on current missions, including Mars. Amidst the flashy interactive hoopla, don’t forget to take a behind-the-scenes tram tour of the actual working Mission Control Center and Space Vehicle Mockup Facility.