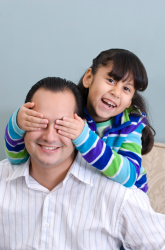 Collect This Article
4.0 based on 23 ratings
by Education.com

According to the U.S. Census' most recent information, there are approximately 13 million children living in single-parent households. That in itself isn't all that surprising, but here's something that is: 2.5 million of those children are being raised by single fathers. That's nearly 1 in every 40 households –over half as many as ten years ago –in which custodial fathers are raising children, many of whom are girls.

So, what kinds of challenges are single fathers of daughters facing? Some issues are gender neutral. Whether they're rearing boys or girls, custodial fathers tend to have a difficult time making ends meet. Unlike single mothers, single fathers are less likely to have flexible work hours and few are receiving child support. In fact, according to Current Population Reports, a publication of the U.S. Census, a mere 30 percent of custodial dads are awarded child support, as compared to 80 percent of custodial mothers.

However, finances weren't John McPherson's biggest concern. As the sole custodian of a 7-year-old daughter, he initially worried that everything he did as a parent would be scrutinized through the lens of gender. "I've found that instead, people are impressed that a man would take that responsibility," he says. But, his worries weren't unfounded. Many people assume the reason a father is awarded custody of his daughter isn't because he's a good parent, but because her mother isn't fit to care for her.

"Every woman was once a little girl," says Roland Warren, President of the National Fatherhood Initiative. His point is that mothers have an advantage that fathers don't –the ability to "give the girls' perspective." Fathers can't tell personal stories of growing up a girl –and what about the growing up “girl” issues like puberty, friendships, and first crushes?

McPherson confesses that, as a male, he doesn't connect with his daughter around certain issues. "I have a hard time handling the over-sensitive nature she has, so I have a hard time adequately helping her with things she gets upset over," he admits. Understanding, too, that as a daughter starts to pull away is when she needs you the most is a difficult concept for dads. "That can be challenging for men," notes Warren.

McPherson relies heavily on his mother and sisters for support, a move of which Warren would approve. "There's nothing wrong with having a network of women, family members or others, who can kind of translate some of what's happening," he states.

Wondering what else dads can do? Here are some tips:

Next Article: Age-Appropriate Father-Child Activities
We enable strictly necessary cookies to give you the best possible experience on Education.com.Cookie policy