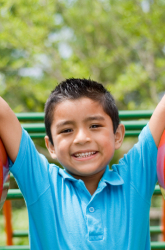 According to popular lore, by age five, girls are studious junior academics while boys are rough and tumble little terrors. That’s an exaggerated view, but not a complete tall tale.

Download Article
The reality is that female kindergarteners score roughly the same as boys in math, science and general knowledge, although they do display a slight edge in reading. However, kindergarten teachers report that female students do better at making friends, working in groups, and helping their peers. (Interestingly, parents judged their sons and daughters more equally.) They also report that girls are more eager to learn, more likely to finish assigned tasks, and much better at paying attention than boys.
Here's some numbers from the National Center for Education Statistics to back up the teachers' claim:

According to Michael Gurian, author of The Minds of Boys: Saving Our Sons From Falling Behind in School and Life, developmental delays in the areas of the brain which control language are common in young boys. Many also have difficulties acquiring fine motor skills and developing their impulse control. Now that Kindergarteners are often expected to dive into the world of academics rather than simply cutting and pasting, these late-developers can become over-stressed and under-confident.

For this reason, boys are more likely than girls to be “redshirted” by their parents – held out of kindergarten for an additional year of preschool after they reach the age of kindergarten eligibility. If you’re considering delaying your child’s entry into kindergarten, investigate the kindergarten agenda at your local school. Some kindergartens hew to the traditional socialization model, which accommodates children of different maturity levels. Others require a level of academic readiness that your son may not be ready for. Speak with the teacher to see what you can do to help prepare your child to meet expectations. Finally, consider your options – if your son delays kindergarten for a year, can you find an affordable pre-kindergarten program that will challenge him?
For both boys and girls, a solid pre-kindergarten or kindergarten program can start the educational experience on the right foot.
Next Article: Less is More: Reduce Rules and Structure to Free the Minds of Boys
We enable strictly necessary cookies to give you the best possible experience on Education.com.Cookie policy