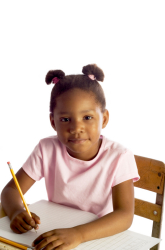 Sugar and Spice and Everything nice vs. Frogs and Snails and Puppy Dog Tails? The gender differences aren't exactly that clear-cut. But by preschool, children identify themselves as male or female, and gender differences in their behavior may already be apparent. Four-year-olds tend to judge others’ genders based on superficial characteristics – assuming, for example, that anyone with long hair must be female, and that perhaps that person’s gender might change with a haircut. Because they don’t understand that gender is constant, they tend to identify with stereotypical male and female activities, says Sharon Carver, Ph.D, Director of the Children’s School and Professor of Psychology at Carnegie Mellon University.

Boys this age love trucks, tools and weapons, but there’s as much nature as nurture in the way they learn and play. Here's what's going on in that little head of his:

Are you getting tired of frills? Preschool girls can be very “girly,” insisting on pink clothes, princess stories and playing house. Here's the low-down on the minds of girls:

Experts agree that exposing your preschoolers to a variety of playmates and experiences will help them bloom into self-confident adults.

Next Article: Helping Children Manage Their Feelings
We enable strictly necessary cookies to give you the best possible experience on Education.com.Cookie policy