Get Your Kids Global Warming Savvy 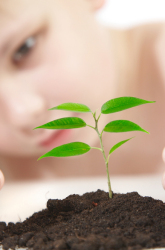 If there's one single issue gaining international attention that may one day define your child's generation, it's that of global warming. And, because kids may be the most affected by climate change, the issue weighs heavily on many young minds. BrainPOP, a New York based educational provider, conducted a survey of more than 1,000 middle school students across the country and found that kids fear global warming more than war, terrorism or the health care crisis.

And who can blame them? It seems impossible these days to escape the bad news: the weather man is reporting drought in the southeastern United States, scientists are predicting that Montana's glaciers will have all melted by the end of the century and people in Ontario, Canada have seen polar bears digging in their trash cans looking for food. All of this while political pundits debate whether global warming even exists.

Does it have to be so scary and confusing for children? Not necessarily, says environmentalist Cambria Gordon and Laurie David, a global warming activist and the producer of An Inconvenient Truth. They believe the issue of global warming can be a source of inspiration for kids, not a reason to stick their heads in the sand.

According to these two “green” moms, in order to combat global warming, kids will need all the information they can get.  Where to start? Gordon recommends teaching kids that thousands of scientists from all over the world now agree that global warming is due to human activity, that carbon dioxide emissions are the number one contributor to global warming and that, perhaps most importantly, the problem of global warming is solvable.

Gordon and David list a bunch of ways kids can stop global warming in their book, The Down-to-Earth Guide to Global Warming. Here's a list of Gordon's top 6 things kids can do to change their ever-warming world:

Gordon says rather than scaring children, these solutions can offer kids hope. “I can’t wait to see where the kids of today end up... There are so many fascinating jobs to be had: glaciologists, solar panel installers, wind power engineers, cellulosic ethanol producers, carbon sequesters at coal-fired power plants, hybrid car designers. The future is theirs.”

One surefire way to keep the future bright is to make sure this generation of kids has the tools they need to protect the planet. And there's never been a better time to start.

Next Article: Save Our Oceans: 5 Things Your Kids Can Do
We enable strictly necessary cookies to give you the best possible experience on Education.com.Cookie policy