Log in with different email
For more assistance contact customer service
School and Academics
School Choices Guidelines
Do Grades Do Any Good?

Do Grades Do Any Good? 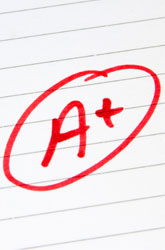 Every parent wants to boast that his or her child is “a straight A student,” “at the top of her class,” or “on the honor roll.” What generally determines this prized status? Grades. Most often, report cards are the primary means of measuring a child’s progress through school. Doing “well” in school is measured by a series of letters on a piece of paper: A is great; B is ok; C, not so great; and D or F? You’re grounded! Some parents reward children for good grades, ascribing a monetary value to each good letter, or taking away privileges for each bad one. For many families, the grade is the goal.

But what do those letters really mean? And do they really do any good?

Many researchers, educators and parents are now questioning the purpose and effectiveness of grades. Certainly parents deserve to know how their children are doing in school, and students benefit from understanding how they are performing; but how that progress is communicated can have a great impact on how a child learns.

Alfie Kohn, author of The Schools Our Children Deserve: Moving Beyond Traditional Classrooms and “Tougher Standards” and Punished by Rewards, writes extensively about the influence of grades on learning. We asked him to articulate how grades impact a student’s education, as well as what adults can do to minimize the negative effects.

What effect does handing out grades have upon the student when it comes to motivation and learning outcomes?

Kohn: The research suggests three consistent effects of giving students grades – or leading them to focus on what grade they’ll get. First, their interest in the learning itself is diminished. Second, they come to prefer easier tasks – not because they’re lazy, but because they’re rational. After all, if the point is to get an A, your odds are better if you avoid taking intellectual risks. Third, students tend to think in a more superficial fashion – and to forget what they learned more quickly – when grades are involved.

As far as I can tell, there are absolutely no benefits of giving grades to balance against these three powerful negative consequences – except that doing so is familiar to us and doesn’t take much effort.

What makes the process of grading so problematic-- is it that the concept of grading is intrinsically unreliable or that it is misused by teachers?

Kohn: This is a question I wish more people would ask! There’s a tendency to assume that any negative effects – of grades or other things – must be limited to the details of implementation. Thus, all we have to do is figure out how to grade “more effectively” and the harms will vanish. With grades, this appears not to be the case. The problem is inherent to reducing what students have done – and, by extension, reducing the students themselves – to letter or number ratings.

To be sure, teachers can make a bad thing worse – for example, by grading on a curve (so that kids are set against one another, thereby adding the toxic effects of competition to what is already destructive about grades), by grading too stringently, by giving zeros, and so on. But the only real solution is to eliminate grades altogether, or to come as close to that as is practical in a given school. Of course, this presumes that our goal is for students to become more enthusiastic and proficient learners. If our goal instead was to sort kids (deciding who’s beating whom), or to induce them to do things they have no interest in doing by bribing or threatening them into compliance, then we might be more reluctant to question the use of grades.

Jerome Bruner put it this way: We want students to “experience success and failure not as reward and punishment, but as information.” That seems to me a useful foundation on which to construct any alternative system for assessing teaching and learning. It’s also a devastating indictment of grades, which are inevitably experience as rewards and punishments.

What alternative(s) does the education system have?

Kohn: Just as you don’t need tests (standardized or homegrown) to learn how well each student is doing, so you don’t need grades to communicate an evaluation back to the students and their parents. You can use narrative reports, by which I mean qualitative summaries of progress in written form, or, better yet, you can have conferences with students and/or their parents to discuss how things are going. Incidentally, many, many schools have abolished grades entirely, and these tend to be places where students are far more engaged with what they’re learning. Even some high schools have done this, and their students don’t appear to be at any disadvantage when it comes to college admission.

We all know that changing the education system is a long process. While this issue of grades plays out, what can parents and teachers do to minimize the potentially negative impact that grades have?

Kohn: Here are two concrete things teachers can do. First, even if they’re forced to give students a grade at the end of the term, they should avoid putting a number or letter on individual assignments. This helps to make grades as invisible as possible for as long as possible – and therefore minimizes the harm they do when students are thinking about them. Second, teachers can help neutralize the destructive effects of grades – and support students’ autonomy at the time same -- by allowing students to participate in deciding what grade they’ll get at the end. The extent to which some teachers are horrified, or terrified, by the prospect of relinquishing their unilateral authority to make that decision is the extent to which grades have been used all along to control kids rather than to provide useful information.

Parents, meanwhile, should minimize the significance of grades, recognizing that straight A’s are often a bad sign (in light of the research I summarized a moment ago). The questions they ask their kids ought to be about what they’re doing, not about how well the teacher thinks they’re doing. A question such as “So is there another way you could solve that problem and still get the right answer?” or “Why do you think the character in that story got so angry?” promotes learning. A question such as “Why only a B-minus?” (or a response such as “A-plus! Way to go!”) undermines learning.

Next Article: High School Rankings: What Do They Mean?
We enable strictly necessary cookies to give you the best possible experience on Education.com.Cookie policy