A Guide to Making the Seder Plate 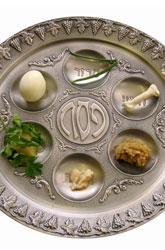 The Passover Seder is one of the mostly widely celebrated of all Jewish customs, and the plate containing symbolic foods lies at the center of every Seder. Each of the six elements on the Seder plate, or Kearah, has special meaning relating to the story of the Jews’ exodus from Egypt, where they had lived as slaves. The Seder is special, not only because of its religious significance, but also because everyone at the table plays a part in the retelling of the Passover story. A special book called the Haggadah is used that has instructions for each step of the Seder along with the story of the exodus.  Preparing the food for the Seder plate can be a family affair and is a great way for young children to learn the traditions of Passover.

Items on The Seder Plate

All Seder plates contain the following, and they must be placed on the plate in a specific order (although that order may differ according to family tradition):

There are also three matzahs, the unleavened, cracker-like bread served throughout Passover, on the table to symbolized the three groups of Jews: the priests, the Levites, and the Israelites.

Maror represents the bitterness the Jews experienced as slaves in Egypt.  Most people use romaine lettuce or prepared horseradish.

Charoset is sweet and has a paste-like consistency that symbolizes the mortar the Hebrews used during their slavery.  A quick and easy way to make Charoset is to take one cup of walnuts, one red or green apple, two teaspoons of cinnamon, two teaspoons of sugar, and some red wine to moisten.  Chop the nuts and apple, either manually or in a food processor, and add the spice, sugar, and wine until the mixture resembles mortar.

The vegetable, or Karpas, represents the onset of spring. The Karpas is dipped in saltwater to represent the tears shed by the Jews during Egyptian rule.

For the Z’roa or shank bone that symbolizes the Passover sacrifice that was made every year at the Temple in Jerusalem, you can roast a chicken drumstick or a meat shank bone in the oven for approximately 30 minutes.

The roasted egg, or Beitah, is simply a hard-boiled egg and represents the festival sacrifice made at the Temple.  The egg later came to represent spring and rebirth.

Making Your Own Seder Plate Game

Since each item must be placed on the Seder plate in a specific order, you can make a cardboard or paper Seder plate for your child to fill in with pictures of the special foods, or they can color the items in.

The order is as follows:
Next Article: Why Teach History?
We enable strictly necessary cookies to give you the best possible experience on Education.com.Cookie policy