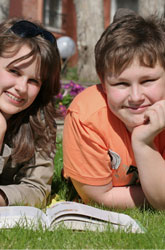 Collect This Article
4.0 based on 6 ratings
by Education.com

We've all heard the stereotypical lines about teenagers: they have it easy, they're spoiled, irrational, troubled... Sometimes it's hard to look at the multi-pierced, text messaging, iPod listening, PDA toting people our teens have become and see the kids underneath. But, under the armor of high-couture and high-tech are young adults with real fears and concerns unique to their generation. And, while the last thing on their minds might be reading, it may actually be the best way for our youth to find some comfort and support.

Mark Twain once said, "Books are for people who wish they were somewhere else." In the halls of our high schools, you'll find scores of people who wish they were somewhere else. You will also find a generation in need of literary heroes. The 60's had Catcher in the Rye's Holden Caulfield, the 70's had Go Ask Alice's Alice and the 90's had Girl, Interrupted's Susanna Kaysen as bibliotherapeutic role models; our kids need some too.

As long as there has been engaging literature, young adults have been engaging in developmental bibliotherapy. That is, teenagers have picked up books, identified with the character and his plight and, through that connection, gained some emotional insight into their own lives. Ideally they’ve also learned and grown from the experience. However, with the exception of school assignments, teenagers choose their own reading material. So how do we guide them toward bibliotherapy without encroaching on their independence?

To start with, parents and teachers need to work together to make sure high schoolers have bibliotherapeutic encounters with literature. Teachers can help by turning to current, well-written young adult fiction as classroom tools. Parents need to provide an appropriate home library and lead by example. Parents who turn to books to learn productive ways to cope are likely to have children who do the same.

Teenagers certainly have tough issues on their minds. Substance abuse, hyper-sexualization, academic pressure and violence are daily pressures our young adults face. Luckily, there are many good novels and non-fiction books that teens can pick up to know they are not alone. Here are some suggestions:

In the end, books aren't a panacea for the trials of high school. But they can certainly serve as non-judgmental and informative friends to our worried teenagers.

Next Article: Qualities of Young Adult Literature
We enable strictly necessary cookies to give you the best possible experience on Education.com.Cookie policy