How Playing Dress-Up Shapes Your Child 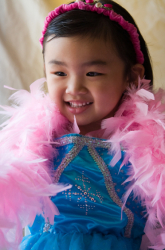 A dragon, a princess, a superhero, a fairy. When kids get into dress-up, their imaginations can transform them into whatever they want to be. What was once your little boy, is now a pirate ordering his brother to walk the plank. Your sweet little girl is now a witch dropping snakes and frogs into a cauldron. And although it may appear as just a precious moment, when your child dons that cape, he is developing in ways you can’t even imagine.

Believe it or not, dress-up play is vital to a child’s development. According to licensed child psychologist Dr. Laurie Zelinger, “It fosters the imaginative processes, and allows for play without rules or script. Dress up allows for experimentation, role play and fantasy. For a psychologist, it also tells us about possible inner conflicts or trauma, based upon the child's expression of the role they play.”

So how can you create an instant wardrobe for your imaginative child? Zelinger suggests these items that won’t have you running to seven different stores or cleaning out the checking account. The best costumes pieces, she adds, are those that can serve several functions.

“Such play is a window into a child’s mind and indicates where they are developmentally,” says Dr. Keith Kanner, licensed clinical child, adolescent, and adult psychologist, and Host of San Diego’s Fox6 News Show Your Family Matters. “As with any age, play is symbolic of and used for psychological growth and is the child’s way of practicing new ways of understanding their minds, relationships, and the world around them,” adds Kanner. Dress-up play (for three to five year olds in particular), he explains, represents three new developmental themes:  gender role identification, the growing and changing of interpersonal relationships, and conscience development.

Kanner explains that play surrounding gender identification is often displayed by little boys dressing up as fathers, workmen, superheroes, and firemen and for girls, as the princess, mother, school teacher, dancer, and business person. Of course, the child will most often mimic what their parents emulate. Says Kanner, “In personal relationship development, you may see your child “playing house,” whereby the children often have multiple roles such as husband, wife, and mother and father.” And for conscience development, be on the lookout for dress-up play that has rules by which the players abide, demonstrating how during this time, the child’s conscience is in a period of formation.

So think twice before throwing out that hat you never wear or tossing the scratched pair of sunglasses. Not only may they be the next coveted wardrobe accoutrements, they might help your child make better decisions in his future!

Next Article: Is Play on its Way Out?
We enable strictly necessary cookies to give you the best possible experience on Education.com.Cookie policy