How a 4th Grader Thinks 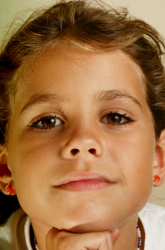 Now that your child’s in fourth grade you can see the end of elementary school right up ahead, but your child’s still developing mentally. And at a rapid pace!

What are fourth graders capable of understanding? Jean Piaget, the psychologist credited with forming the theory of cognitive development in the late 1920s, created a list of of what can be expected at each stage, and it's still in heavy use today. Here's what had to say about kids in this age range:

Understanding what fourth graders are capable of comprehending is the first step. Another psychologist, Benjamin Bloom, took things further. In the 1950s, he led a group of researchers in creating a cognitive learning guide that illustrated several levels of understanding. According to Bloom, all children go through a steadily deepening process of comprehension, and in the same order. But children vary in how long it takes them to reach each level.

Each level is based on the one in front of it, similar to a staircase. Once you have a sense of what your child is capable of comprehending, you can use Bloom's levels of learning as a guide for helping your son or daughter reach the next step of understanding. The levels of learning are:

Keep in mind that Piaget and Bloom offer their own yardsticks, but no hard and fast rules. Still, taking a look at their guidelines can help you help your child. By giving your child a new concept that's not beyond her fourth grade mental limitations, you can watch her progress through the levels of learning. You can help her progress faster by asking questions that require not just knowledge or comprehension, but evaluation. For example, after reading a poem, you might ask your child, "How would you write a poem to express the same emotions and themes in this one?" rather than, "What's this poem about?" The second question requires only comprehension, but the first one makes your son or daughter think about what the poem contains, how well it expresses everything, and how he could make it better.