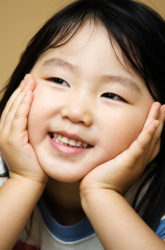 Preschoolers can come up with some pretty wacky ideas, but according to the experts that's all part of growing up. It's important as a parent to know what a child is capable of understanding, so that you can form reasonable expectations. Every child  grows at his own rate, but  there are physical changes that make mental leaps possible.

Jean Piaget, the psychologist credited with forming the theory of cognitive development in the late 1920s, created a list of what kids at each stage are capable of, and what they are not quite ready to do yet. Here's what he found for preschoolers:

So, what are preschoolers capable of learning? For that, we turn to 1950s psychologist Benjamin Bloom. He led a team of researchers to create a cognitive learning guide which points to how different ages process new information. The guide shows at what stage your child understands a concept. Each level is based on the one in front of it, similar to a staircase. The levels of learning are:

Most preschoolers will be comfortable in the areas of knowledge, comprehension, and application, but not quite at the stage of levels 4-6. That's perfectly normal.

When you introduce your child to a new concept, keep the stages in mind and ask questions. Listen to the response and use it to guide the child to the next plateau. For example, if you know that your son can analyze the problem but not quite synthesize it, help him collect the facts. Guide him towards coming up with a theory. With your help, he can learn to weigh the information and draw conclusions from it. Help him progress faster by asking a question that requires evaluation, such as what he would have done if he faced the situation in the story. This encourages him to decide if the character’s actions were good or bad.

All of the guidelines in the world are only that... guidelines. Each child develops at her own perfect pace. So keep the expectations in mind but take them with a grain of salt. Then sit back with your child and enjoy the ride.

Next Article: Mathematics Development
We enable strictly necessary cookies to give you the best possible experience on Education.com.Cookie policy