How the World Celebrates Mother's Day 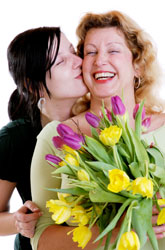 Mother’s Day is one of America’s most popular holidays, with moms across the country annually showered with flowers, cards, candy, breakfast in bed, and dinners out. But the practice of honoring and celebrating mothers occurs in many other countries, from Argentina to New Zealand.

In the U.S., Mother’s Day falls on the second Sunday in May. The original holiday was established in 1914 by President Woodrow Wilson as a celebration of peace. Other countries also observe the holiday in the spring, probably dating back to the Roman celebration of “Magna Mater” (great mother) which fell in mid-March. Later, early Christians began to celebrate the holiday on the fourth Sunday of Lent as a way to honor the church in which they were baptized, known as their “mother church.”

In the United Kingdom, the holiday became known as Mothering Sunday, and it quickly became a time for churchgoers to not only visit their home church but to celebrate with family. Today the U.K celebrates the day much as we do, with cards, cakes, and dinners for mom, along with flowers, especially violets.

Other countries observe Mother’s Day in the following ways:

In India, a westernized version of Mother’s Day is celebrated on May 10, but Hindus celebrate their divine mother, the goddess Durga, with a ten-day festival known as Durga Puja. Families spend weeks preparing special meals and gifts for friends and relatives.

The Japanese call Mother’s Day haha no hi. Japanese children draw pictures of their mothers, and the drawings are entered into a contest. The winning drawings are shown throughout Japan and other countries in a moving art exhibition. Many Japanese today, however celebrate a westernized holiday on the second Sunday of May.

In Yugoslavia, Mother’s Day is observed in December as part of a three-day series of holidays, starting with Children’s Day three days before Christmas. On this day, children are tied up and not released until they promise to be good. The following Sunday, Mother’s Day, the mother is tied up, and she cannot get up until she gives her children treats and gifts. The next Sunday is Father’s Day where dad is also bound and must provide gifts that are usually the family’s Christmas presents.

France observes the National Day of Mothers in May where mothers are given cards, candy, flowers, perfume, and traditionally, a cake shaped to resemble a bouquet of flowers.

In Mexico, Dia de las Madres, Mother’s Day, is celebrated on May 10. It is widely celebrated, with sons and daughters coming to their mothers’ homes the night before, and then mom is serenaded the next morning and treated to a lavish family breakfast or brunch and homemade gifts, flowers, and cards.

Italians observe Mother’s Day with a family feast and a cake made in the shape of a heart. Children bring presents to their mothers and help with chores and housework.

In Finland, the whole family gets up and begins Mother’s Day with a walk, picking spring flowers to make a bouquet for their mother. At home they present her with the bouquet along with breakfast in bed.

This Mother’s Day, trace your family’s cultural heritage and discover which new tradition from around the world you might incorporate into your own celebration.

Next Article: The History of Mother's Day
We enable strictly necessary cookies to give you the best possible experience on Education.com.Cookie policy