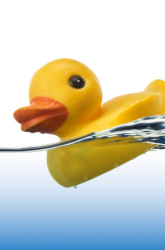 With toy safety at the forefront of parents' concerns, a new focus on product safety has many wondering just what dangers may be lurking in playpens and bathrooms. And while the rubber ducky in your child's bath may seem like the most innocent of toys, mounting concern over the health risks of plastics, in toys and myriad other products, may change parents' attitudes towards plastic playthings.

Chief among these concerns is the widespread use of a group of chemicals called phthalates, which are added to plastic to make it soft and pliable, and are particularly widespread in polyvinyl carbonate (PVC). Phthalates can be found not only in toys, but in construction materials, food packaging, personal care products, and medical equipment –making them an almost inescapable material in our everyday lives. But though they're everywhere, a growing level of concern about reproductive and developmental health risks linked to phthalates has policymakers, and parents, up in arms.

“Phthalates have a number of adverse health effects,” says Emily Rusch, a consumer advocate for the public interest group CalPIRG, “and of course children are more vulnerable, since they're still growing and developing.” She goes on to cite evidence of early puberty in girls, premature delivery, genital defects, and sperm damage in men. But Michael Shelby, PhD., Director of the Center for the Evaluation of Risks to Human Reproduction, says the weight of evidence suggests phthalates are of concern primarily for male premature or very sick infants who undergo extensive medical treatment, as they are likely to be exposed to high levels of PVC in medical equipment at a critical stage of development. However, he confirms that some phthalates in widespread use have been shown to have adverse developmental effects in animal studies. “A major mechanism by which they have these adverse effects is by somehow reducing the levels of testosterone in these animals as they are developing,” says Shelby.

Scientific evidence has been strong enough for the European Union to take action against phthalates, and they've been banned in products intended for children since 1999. A new California-wide ban follows the EU's lead: effective Jan. 1, 2009, phthalates will be banned from children's products in the state. And while the plastics industry maintains that phthalates have not been proven unsafe, many toy manufacturers and distributors have pledged to eliminate phthalates from their products. In a statement released in response to California's new phthalate ban, Toys 'R Us states that “Because we always hold ourselves to the highest safety standards, we are committed to ensuring that all of our products affected by this new law –whether sold in California or in any of out other stores nationwide –strictly adhere to the new standards.” But although most manufacturers, such as Mattel and Lego, pledged to eliminate the use of phthalates in toys for young children, Rusch says that CalPIRG's annual toy safety report consistently finds phthalates in many products –even some labeled “Phthalate Free.”

Rusch says that even if phthalates are eliminated altogether, the issue of toy safety is not just going to go away. She points to a larger problem affecting our nation: “The chemical industry's power and influence are very strong,” she says. “How many of these fights against individual chemicals are we going to have to have before we say 'wait minute, maybe we should require these things to be tested for safety beforehand'?” Case in point: bisphenol A (BPA), a plastic additive used in bottles, containers, and some toys. While some studies suggest that BPA may pose a health risk, products containing the chemical, including many baby bottles and “sippy cups,” remain on the shelves. “We really should be putting more pressure on our members of Congress to better protect our kids from unsafe toys,” says Rusch. “It's unacceptable that there are these risks in toys that parents can't even see.”

In fact, new measures for product safety are being introduced to both the Senate and Congress, and may mark a sea change in how products of all kinds are evaluated for safety. Until then, parents can play it safe by avoiding soft, bendable plastic toys, highly processed foods, and heating food in plastic containers. Shelby says that while you can't eliminate contact with phthalates altogether, you can take steps to avoid them. Though the health risks are uncertain, it's better to be safe than sorry.

Next Article: Is Your Home Making You Sick?
We enable strictly necessary cookies to give you the best possible experience on Education.com.Cookie policy