Log in with different email
For more assistance contact customer service
School and Academics
Helping Your Child With Social Studies/History
Jack-o'-Lanterns: The Inside Scoop

Jack-o'-Lanterns: The Inside Scoop 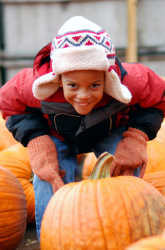 Tonight's the night. Get out the newspapers, the knives, the candles, those fat pumpkins from the porch, and gather your family around the kitchen table: It's time to carve up those Jack O'Lanterns!

In fact, today's orange squash tradition stems not from the fruit itself, but from an Irish folk tale. At the core of it all was a character named Stingy Jack, a shrewd farmer who liked to steal from his friends and play mean tricks on his family. According to the tale, Stingy Jack met the Devil in his orchard one day. He cunningly offered his apples, suggesting the ones at the top of the tree were particularly delicious. When the devil climbed up to help himself, Jack quickly carved a cross into the bark of the tree, so he couldn't climb down. Then Jack made the Devil promise not to take his soul when he died. Once the bargain was struck, Jack removed the cross and let the Devil go free.

Well, Jack's day of reckoning finally arrived. He went to the Pearly Gates and was told by Saint Peter that he was too mean and cruel to be allowed in. Then Jack went down to the Underworld, but the Devil barred his way there, too, keeping his promise. “Where am I to go?” Jack asked the Devil. “Back to where you came from,” the Devil replied, tossing him an ember to light his way. Stingy Jack pulled out a turnip from his pocket and, carving out a hole, put the ember inside. Thus, the first incarnation of the Jack O'Lantern was born.

Poor Jack was forced to wander for years in the darkness between Heaven and Hell, with nothing but this make-shift lamp for light. In Ireland and Scotland, people feared lost souls like Jack's, and so they had many ways of making sure the spirits stayed away. They put out treats to appease the ghosts, or they dressed up in costume to frighten them away. (Sound familiar?) Another scare tactic was to carve or paint faces on turnips, potatoes, rutabagas, or beets—a symbol of Jack—and leave them in the windows. Hence the name, Jack of the Lantern or as we call it today, Jack-o'-Lantern.

When Irish and Scottish immigrants arrived in America, they were pleased to find a native fruit of North America perfect for continuing this practice: the great pumpkin. It was bigger, softer and easier to carve than the original Irish tubers. Can you imagine making a Jack O'Lantern out of a beet?

And so this Celtic tradition worked it's way into America's melting pot culture—today adding a key element to a very American holiday.

Why not share a bit of the origins of the Jack-o'-Lantern with your kids this year, while you're busy carving away. Sure, it's a grim tale, but Halloween's the perfect time for a bit of the macabre! Pull out your carving knife, pull up your best storytelling chair, and throw a few turnips on the table for good measure. You just might spark a love for Irish folk tales, while you're lighting your lanterns this Halloween.