Log in with different email
For more assistance contact customer service
School and Academics
Helping Your Child with Science
Kindergarten Science: What to Expect

Kindergarten Science: What to Expect 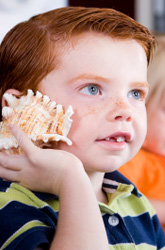 With State and Federal standards for reading, writing, and math getting tougher, science is a subject that sometimes gets put on the back-Bunsen Burner. But for kindergarteners, science is the one subject that is an extension of children themselves; the one subject that comes completely naturally to them. Most teachers recognize this, and in order to weave science into the tight kindergarten schedule, you can expect that they'll find a way to magically incorporate it into those subjects that truly are “under the microscope”-- reading, writing, and math.

Dr. Gerald Wheeler, Executive Director of the National Science Teachers Association, confirms what most of us observe in our own children daily, “They’re natural scientists! They just need help with getting the right tools and making significant connections.” Kindergarten science standards vary from state to state, and even district to district, but Wheeler says that in a nutshell, the curriculum should teach “the very basic foundations in and of science: observing, finding patterns, classifying, and grouping.”

Not all kindergarten science programs are the same. But here are some key topics that you're likely to see in your child’s first formal scientific training:

The Experimental Process: This year, kids learn that science is about experimentation, and they're excited about it! Expect a kindergarten version of “Experimentation 101” to include observation, investigation, prediction, description, sorting and classifying. Students will practice reporting their findings, sometimes orally, but often through artwork. Though teachers may not offer it up, at this stage of the science game, the words “play” and “experiment” could probably be used interchangeably.

Kinder Physics: Physical science will be at the foundation of all other sciences for your kindergartener, because the five senses are a key physical science concept that she’ll use as she explores and experiments. Once kindergarteners get a handle on which senses to use to gather information, they begin comparing and classifying by physical properties. For example, your child might use physics when she compares shadows with her classmates, or when she discovers the difficulty in bobbing for apples for the first time.

Feathers, Fur, and Seeds: Life science is a kindergarten favorite, because it includes the study of animals. With your child’s newly established classification skills, he’ll be able to impress you (and himself) with the brilliant connections he’ll make about living things. Kindergarteners learn the basics about plants as well, and what all living things need in order to survive. Your child is likely to bring home a seed or two that was planted and grown in class, and you can also expect her to tell you what it needs to survive (though she may not be as quick to take the blame if it doesn’t!)

Earthy Observations: Expect earth science to show up almost daily in your child’s kindergarten class. How? Through weather observation. Many classrooms have exciting charts, tricked out with Velcro and all kinds of stick-on illustrations, to display the daily weather. Your child will likely become more in tune with the passage of time, as she studies the changes in the environment according to seasons, and how they affect our daily lives. You may not expect that your child could be any more of an expert on dirt, sand, and rocks than he already is, but kindergarten earth science often covers those down and dirty topics as well.

How can you grow a future scientist? “The role of a parent is to keep the child open," Dr. Wheeler says. Encourage your child to use her scientific eye at all times. Call attention to the world around you-- whether it's the fact that the train runs on electricity, or the fact that a new bird nest has popped up in your backyard oak tree. Be sure to encourage girls, as much as boys, in this field. Science has been given a masculine preference stereotype in the past, but the world will need more and more future scientists, and girls can have just as natural an inclination as boys to find the subject fascinating. You can help at home, with fun kindergarten science activities that are hands-on and engaging.

Curious where your child will be come kindergarten graduation? In terms of science, by the end of the year, your child should be able to:

If you want to know how your child will feel about kindergarten science, take a look at what she's doing right now. Exploring? Observing? Taking in the natural word around her? Expect more of the same in kindergarten!