What to Expect in Kindergarten Math 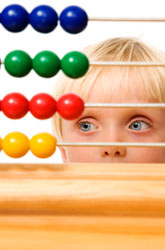 It's hard to believe that your baby is growing up and doing mathematics! Math is a big part of your child’s day in kindergarten. Your child will be exploring, experimenting, counting, sorting, and explaining. Young children often have trouble with symbolic concepts. For this reason, the early childhood classroom uses manipulatives. A manipulative is anything that your child can count or handle that helps him or her learn a concept. Typical math manipulatives found in the classroom include cubes, dice pattern blocks, clocks, and puzzles. For example, when someone says “three,” adults have no trouble visualizing three objects and the numeral 3, but it’s not as simple for children. By having something concrete like a manipulative to work with, child eventually bridge the gap between the physical world and the world of symbols and abstract concepts.

Here's how it might work. A child learning basic addition facts may start by using manipulatives to help him or her solve the problem. If the problem is 5 + 3, your child may make one group of five cubes and one group of three cubes. To find the sum, he or she will then put the groups together and count the total. By using manipulatives, your child will begin to understand that addition is putting groups together. The cubes serve as a bridge to the symbolic 5 + 3 = 8. Number sense is very important for success in math. It's a set of math skills that describes your child's understanding that numbers represent quantity or "how many". Children who develop number sense understand the order in math. They see the  relationships that numbers have to one another; they understand how numbers are put together and taken apart; and they have an intuitive sense about our number system. Working with patterns is another very important concept in mathematics. In kindergarten, your child will be working with patterns by sorting and grouping objects into sets and by explaining and extending simple patterns. Learning to recognize and extend patterns is a skill that will have many applications beyond the mathematics classroom. Here’s what your child should be able to do before starting kindergarten math:

By the end of kindergarten, students working at the standard level:

Adapted with permission from "Kindergarten Success: Everything You Need to Know to Help Your Child Learn" by Amy James (Jossey- Bass, 2005), which we highly recommend.