Let Your Kid Play with Fire 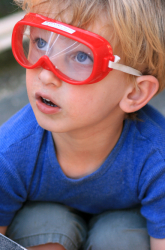 Should you let your kid play with fire? Brandish a knife? Drive a car? Gever Tulley says yes.

Tulley is founder of the summer program, The Tinkering School, which teaches kids to build things and take them apart. He’s put power tools into the hands of second graders and let seven-year-olds use drill guns. He’s vehemently against warning labels on hot coffee cups and suffocation warnings on plastic bags. And he says more adults should be of like mind.

“We seem to think that any item sharper than a golf ball is too sharp for children under the age of 10,” Tulley says.  But by rounding every corner and keeping kids perpetually in the safety zone, we’re denying them the chance to cut their teeth on opportunities that give them the chance to learn from the world around them, he says.

Raising confident kids means giving them the tools to be in control of their environment. It means teaching them to be creative and experimental. How can we do it? According to Tulley, by letting them try dangerous things.

Case in point: let them play with fire. They’ll learn about intake, combustion, and exhaust—the three components that make fire possible. “The open pit is a laboratory,” Tulley says. There’s science going on here that kids will never get from a textbook.

Or, how about this one: give them a pocketknife. The venerable Swiss Army may have gone somewhat out of favor, but by gifting kids a knife, you’re giving them their first universal tool. Children in countries the world over are given sharp implements barely out of toddler-dom and they learn to cut away from their bodies and to keep their knives sharp. They also learn how it feels to accidentally cut themselves. But that’s okay, Tulley says, “They heal fast.”

If you're not crazy about the fire or knife concept, perhaps teaching your kid to throw a spear is more on target. Tulley says the age old art of spear throwing stimulates the frontal lobe of the brain, hones concentration, and increases visualization skills. Or for those parents without a spear handy, Tulley suggests finding an empty lot and letting your wee-one drive your car. “An empowering act, ” he says, that “gives them a handle on the world”.

So is this guy crazy, or what? Richard Winefield, Executive Director of the Bay Area Children’s Museum, says while he wouldn’t recommend the car or fire suggestion, he also says, “society has become so protective and risk-averse with kids that we’re not doing them any favors.”

Today’s parents, in their desire to protect their kids from all harm, are keeping them from anything that might be remotely dangerous. For example, Winefield says, “We have a crows nest here at the museum that children can climb up. It’s probably 8 feet off the ground. And there are parents that won’t let their kids go up there because they’re afraid they’ll fall out of it. I want to say, ‘Just let her go.’ Kids don’t have a suicide urge!” All this protection can be detrimental, says Winefield. “There’s a sense of power in climbing up to the top. There’s a sense of  ‘I can do that’. That is so important to kids. When we disempower children and don’t allow them to do those things, it’s not good for them and it’s not good for society as a whole. We’re raising a whole generation of kids that are risk-averse."

Still, Tulley acknowledges that it's possible to go too far in the other direction. "I’m not saying give your kids a box of matches and a bottle of lighter fluid and send them outside, while you’re inside making dinner,” he says. “But it’s only with loving supervision that they can learn to do things like these safely.” He advises parents create a “safe zone” of cobblestones so fires can’t get out of control, and “practice putting out the fire with a hose before you even light it."  Similarly, “don’t send your kid to the back stoop with a brand new knife until they know how to use it. But once they learn to be safe, you can trust them to whittle on the stoop for an hour without supervision.”

Today’s parents are more protective of their kids than previous generations. And a lot of that has to do with the news, says Roberta Golinkoff, H. Rodney Sharp Professor at the University of Delaware and author of Einstein Never Used Flashcards. “I think parents are more worried about making sure that their children are appropriately supervised at all times. The downside of this is that children don’t get to try things out on their own, to make mistakes, to practice walking to the library by themselves, until they are much older than they were say, fifty years ago.”

While Golinkoff isn’t keen on some of Tulley’s more “dangerous” proposals, she’s a fan of one of his suggestions: allowing kids to disassemble appliances. "Having the opportunity to ‘mess around’ by taking appliances apart and seeing how they work and what they are made of can be a fabulous experience for children, whetting their appetite to learn more,” she says. “Where will the engineers and inventors of the future come from? From kids who are allowed to engage in unusual experiences with the inanimate objects that surround them.”

Marc Rauch, PsyD, who works with emotionally disabled youngsters, agrees. “Doing these sorts of things helps build children’s self esteem and teaches them to see themselves in a different light. It can make parents worried. But we need to teach kids to take risks in a supervised environment, just like we teach them to cook, even when the oven is hot.” Rauch says if we never let kids experiment, they won’t learn to problem solve.

In other words, take a deep breath, parents. “Litigation has reshaped our vision of what’s safe for kids and transformed it into something that’s comical in its limitations,” says Tulley. Risk has its rewards, especially when there’s a parent standing close by.

Teach your kids to light that fire. Watch them throw that spear. Let them dismantle that appliance. You’ll be doing them a favor. And besides, you didn’t need that toaster oven anyway…