Log in with different email
For more assistance contact customer service
Learning and Your Child
Creativity and Children
Childhood Artwork: What to Look For

Childhood Artwork: What to Look For 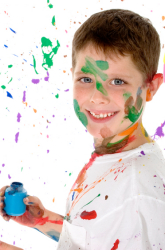 Got kids? Got crayons? If so, odds are your refrigerator is covered in artwork. Maybe you've used drawings as wrapping paper for family gifts or framed a couple of pictures for that special spot above your desk.

Download Article
Your child’s creations are unique to them. Yet, as first described by art educator Viktor Lowenfeld in the 1940s, a child's artistic development follows a common pattern from ages two to twelve. Learning what's key to each stage will help you figure out what to keep for posterity. Here's the general course for your little Van Gogh:

At any of these stages, children may copy their own work repeatedly. This doesn't indicate a lack of creativity, just the simple reinforcement of new skills. Enjoy the artistic overflow while it lasts. After age twelve, children tend to grow more critical of their own work, and only the most artistically inclined keep at it. Your refrigerator face may seem crowded now, but it may return to featuring nothing more than generic magnets sooner than you think.

So save those precious art projects as they're created—don’t wait until they're yellowed with age. Ask your child to describe each scene so you can label and date it, but don't let them pile up in a box—use them! Transform a painting or drawing into a plate or coffee mug. Turn another into a magnet. Then give it a place of honor on the fridge for life! Too awkward to paste into a book? Take photos of three-dimensional art and save them in a portfolio or photo album.

Although only you can decide what is worth preserving for posterity, it might be interesting to you and your child later in life to have a few pieces from each of their stages. Even if your child doesn't turn out to be the next Georgia O'Keefe, you’ll both appreciate the progression from scribbles to cubes.
Next Article: Modern Art 101
We enable strictly necessary cookies to give you the best possible experience on Education.com.Cookie policy