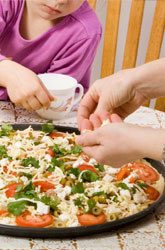 Sure, sandwiches are fine. But why not enlist your child to help create their own lunchbox entree? These three easy baking recipes will have your child measuring, mixing, and timing his yummy treat, while giving him a sense of what it really takes to fill a lunchbox every day. Plus, he'll get to eat his creation at lunch the next day!

These savory treats are based on the Greek dish, spanakopita. I kept the first part of the name, which means "spinach," and dropped the "pita," which means "pie." Why "footballs"? Well, back in the old days before test messaging, we passed notes in class on actual paper. This triangular fold was known as a football.

In the 1980s quiche got the reputation of being fussy, prissy food. maybe because its name is French and some people felt stupid because they didn't know how to pronounce it. (It's easy: keesh).) Luckily, that ridiculous attitude went out with cassette tapes.

Give Pizza a Chance

Pizza has it all - fun to make, fun to eat, and you can customize it with your favorite toppings. I made this one half pepperoni, half veggies. Which side would you choose?

Excerpted with permission from Bake It Up! by Rose Dunnington (Lark Books, 2006).