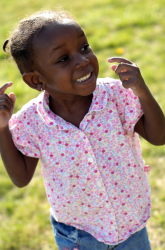 Even if your child isn't singing in the shower or singing in the car, he's probably singing in the classroom. Early childhood educators are singing the praises of song as a literacy tool. But using music to teach isn't new. For thousands of years chants and songs have been used  to pass stories down from generation to generation. Although over the centuries written language has overtaken oral language as the primary means of communication, the power of music to teach language persists. Literacy learning begins long before a child starts to read and it often begins with music.

"If you look at the elements of music: tempo, rhythm, dynamics, harmonics," says LyAnn Grogan, MT-BC, "you can manipulate the elements to get the desired effect." Grogan is a certified music therapist; by definition her job is to help achieve non-musical goals through the use of music.  She notes that music is a way to access different learning intelligences which, in turn, can increase both retention and attention.  "When we're talking in a spoken voice,  auditory information travels on a certain auditory nerve to the brain and to a certain spot," she explains. "But when you sing you'll remember it much better because the information is going in on a different route and gets stored differently in the brain."

How does this relate to literacy?  Think about your earliest experiences with letters and words. Just like everybody else you probably learned to sing your ABCs long before you could recognize or write them, and the nursery rhymes and finger plays that are a part of young child's life are literacy tools, too. They teach children to play with word sounds, a game which relies on the most basic concept of literacy: phonemic awareness.  That ability to manipulate the smallest elements of  words to make new, similar-sounding words  is the beginning of the ability to recognize patterns in speech and, ultimately, text. The manipulation of elements is sometimes more easily recognizable in music.

Some very successful early literacy programs are built on that premise. Take, for example, the Land of Letter People program. Each person arrives to the fanfare of his own song: one that uses alliteration and repetition to teach kids about his letter sound.  Kindergarten students across the nation come home singing about  Mr. N's "Noisy Nose" and about how Ms. M uses her "Munching Mouth" to "munch, munch, munch on lunch, lunch, lunch."  Just by listening (and sometimes dancing) to the songs, children are learning to recognize words that begin with the same sounds and how to manipulate those sounds to create new words.

Children seem to be hardwired to use music to convey stories and information. Grogan relates that the sound of the descending minor third --the childhood taunt "Nyah-nyah-na-nyah-nyah"-- is common to kids all across the world. The phonemes differ, but the harmony and meaning remains the same.  Adults can take advantage of that innate ability to teach kids all sorts of information. "It's simple stuff that everyone can do,"  encourages Grogan. "You don't have to be a trained musician, it's understanding that those elements are manipulable to get the desired effect." Here are a few musical ways to teach literacy at home:

So, maybe it's time to start the lyrical literacy learning in your home; you don't have to be a music therapist or literacy specialist to do it and you might just begin another thousand years of oral tradition.

Next Article: Throw a Peanut Butter and Jelly Party!
We enable strictly necessary cookies to give you the best possible experience on Education.com.Cookie policy