Log in with different email
For more assistance contact customer service
School and Academics
Math and Inspiring Your Child
Math Up the Olympics!

Math Up the Olympics! 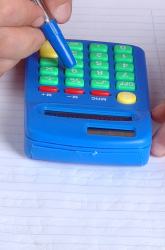 As athletes from around the world gather for the upcoming Olympic Games, it's the perfect moment to capture your child's interest in the exciting events that are about to take place – and take advantage of that interest to introduce some related mathematical concepts.

None of these activities will even cause you to break a sweat, but they will allow you to have fun with your children as you watch the games, read about them, and—perhaps—win gold medals for your amazingly quick calculations. Just don't blame us if by the end of it all you're planning a family vacation to the next Olympics!

Practice Converting Measurements Since the Olympics are an international event, distances and speeds are measured using the metric system. It can be difficult for a child to grasp the concept that people around the world use different units of measurement for the same thing, so the concrete examples of the Olympics provide the perfect way to illustrate how this works.

First, explain to your child that 1 meter is equal to 3.28 feet. That means that, for instance, the 100-meter dash is equivalent to a run of about 328 feet. Challenge your child to convert the following distance events into feet:

Your child can also try out some currency conversions! He'll boost his research skills as he determines the current exchange rate for the Olympics host country, and practice a little math calculating how many of that currency he can get for 10 U.S. dollars.

Discuss Decimals and Fractions Many Olympic medals are won or lost by tiny increments of time, distance, or points. In the 2004 games, for instance, Dwight Phillips (USA) won the men's long jump with a leap of 8.59m, while second place went to John Moffitt (USA) with a distance of 8.47m. Use figures like these to explain how decimals relate to fractions: 0.59m is the same thing as 59/100m.

Slip in an introduction to precision in measurement while talking to your child. Explain how the Olympic Games have changed throughout their history because of improvements in technology. Just fifty years ago, for example, stopwatches could only measure time up to an accuracy of 0.1 seconds—so if two runners finished a race within 0.1 seconds of each other, it was impossible to determine which athlete had the faster time. Today, computers are used instead of stopwatches—and they can measure time up to an accuracy of 0.001 seconds. That's a hundred times more precise, and it makes it much easier to know who's really won an event.

Go Over Graphing Choose a sport, athlete, or country to follow over the course of the Olympic Games, and use the data you and your child collect in order to create a graph. For instance, your child can compile a graph demonstrating how many medals are won by the United States on each day of the games. Or, create a graph showing the best daily scores that are recorded in a particular event. Talk to your kids about how graphs make it easy to see the overall trend of a person's or a country's achievements. You might also point out how a graph can clearly reflect an upper limit on human abilities. (No one is ever going to be able to swim the 100-meter backstroke in just 20 seconds, for example, and that particular point on the graph would therefore be very far away from the line showing the best times.)

Work with Word Problems Try working through some Olympics-related word problems with your kids. Here are a few to start with:

Extra Credit! Get outside and work on some world record calculations of your own!

Long Jump: Set up a “long jump” pit at your local playground, and have your child take a running start to leap and land as far as he can. Then, mark the spot where he landed and have your child measure the distance using a tape measure. How many feet did he jump? How many meters? Compare to Dwight Phillips' 8.59 meters in the 2004 Olympics.

100 meter dash: The shortest race in the Olympics, the winner of the 100 meter sprint is often referred to as “the fastest man/woman on Earth.” Measure out 10 meters (32 ft.) with a tape measure on your sidewalk or in a park. Time your child as she races the 10 meters. How many seconds did it take? Multiply that by ten to find your child's 100 meter time. Is it enough to beat Jamaican Usain Bolt's world record time of 9.72 seconds? Maybe next time!

Create your own Olympic event! Whether it's sledding or swimming, kids have some pretty great stamina and strength. Host a neighborhood competition or simply time your own child doing an activity and record the time to be broken later!

Next Article: Make Math Interesting!
We enable strictly necessary cookies to give you the best possible experience on Education.com.Cookie policy