Nurture Over Nature: Study Gives Adoptive Parents An A+ 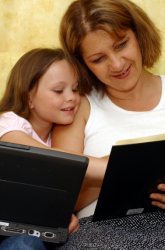 Have you ever considered adoption, but worried you wouldn’t rise to the challenge with a child that didn't share your genes? New research says not to worry.

A study funded in part by the National Science Foundation found that when it comes to comparing the efforts of biological and adoptive parents, blood may not be thicker than water.

Not only are adoptive parents at par with "regular" ones, but they actually invest more time and money in their children than biological parents do, the study found. Adoptive parents are more likely to:

Conducted by sociologists Brian Powell and Laura Hamilton at Indiana University Bloomington and Simon Cheng at the University of Connecticut, the study is turning the world of sociology on its head. That’s because conventional wisdom has always told us that parenting your biological children is easier for you and better for them. There’s even a theory in evolutionary science that states we instinctually pander to our children because they carry our genes.

So what’s the big deal? Well, for one, these questionable theories have had far-reaching effects. Most recently, the Washington Supreme Court upheld a state law banning same-sex marriage with the reasoning that children are better off with their biological parents.

It’s this traditional reasoning, says Powell, that pushes adoptive parents to be more hands-on in order to prove themselves. They are proud of having achieved parenthood--many of them have struggled with infertility or were waitlisted for years. “By the end of the disappointments, efforts, and paperwork, the remaining prospective adoptive parents may be inclined to invest heavily in the parenting role,” says Powell.

The new study redefines what drives parents--both biological and adoptive-- to provide for their children: It’s more than just passing on genes.

Researchers expect the number of households with adoptive children to grow significantly over the next decade. Hopefully our definition of a family will expand, too.

Next Article: How the World Celebrates Mother's Day
We enable strictly necessary cookies to give you the best possible experience on Education.com.Cookie policy