Obama on No Child Left Behind 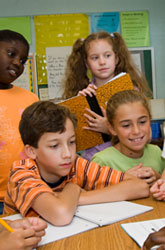 It looks like No Child Left Behind, one of the most hotly debated education issues of the decade, is here to stay—though not without some major changes. While most would agree that the intent of NCLB was both positive and important, many educators, researchers, and policymakers believe there are major flaws with this legislation.

“… I’ll tell you what’s wrong with No Child Left Behind,” President-elect Barack Obama said in a speech in Manchester, New Hampshire in 2007. “Promising high-quality teachers in every classroom and then leaving the support and the pay for those teachers behind is wrong. Labeling a school and its students as failures one day and then throwing your hands up and walking away from them the next is wrong.”

So what does Obama propose we do to turn NCLB around? To start, he says it’s necessary to provide the funding that was promised and give states the resources they need. Additionally, Obama suggests two fundamental reforms to NCLB:

Obama’s administration believes funds should be provided for states to implement a broader range of assessments to evaluate higher-order skills, including students’ abilities to use technology, conduct research, engage in scientific investigation, solve problems, and present and defend their ideas. These assessments should provide immediate feedback so teachers can begin improving student learning right away.

Improvements to the Accountability System

Obama believes we need an accountability system that helps schools to improve, rather than one that focuses on punishments. He believes schools should assess all children appropriately, including English language learners and special needs students. The system would evaluate continuous progress for students and schools all along the learning continuum and would consider measures beyond reading and math tests; it would also create incentives to keep students in school through graduation, rather than pushing them out to make scores look better.

The suggested improvements will be welcomed by many parents and educators. “These reforms are needed,” says Cindy Reed, Ed.D, Director of the Truman Pierce Institute, a research and outreach unit in Auburn University’s College of Education. “One of the positive elements of NCLB is that it was a bipartisan effort looking at how we can improve public education.” Reed explains that due to underfunding there were unintended consequences and “a lot of the really good ideas that were included within the act were not operationalized in the way they should have been.”

Linda Chavez, Chairman of the Center for Equal Opportunity, a nonprofit public policy research organization, isn’t so convinced. “We’re hearing a lot about how we need to pour more money into education and NCLB,” Chavez says. “I personally think money is not the cure.” Chavez stresses the importance of holding teachers accountable. “Without accountability, you end up with those teachers who stay year after year, teachers who are not open to being evaluated,” says Chavez.

There have been a number of criticisms of NCLB over the years:

“I think the major flaw with NCLB is that they treat all schools as equal,” says Adam Thibault, Policy Director for Strong American Schools, a nonpartisan public awareness and advocacy organization. “Schools are not given credit for making incremental improvements, and I think there has to be more flexibility within the system.”

Obama addresses this concern by suggesting a system that evaluates continuous progress along the learning continuum. This would mean using assessments for schools, teachers, and students that take into account their starting point as well as their resources.

Another criticism has been the emphasis on high-stakes standardized testing as a means of measuring student learning. Many believe that since NCLB, teachers have become overly focused on the testing rather than student learning. “It’s unfortunate,” Reed says. “NCLB has emphasized a deficit approach to teaching and learning rather than building and celebrating successes.”

Obama’s plan clearly states his belief that schools should be supported to improve, as opposed to focusing on punishments.

Reed is also concerned with the superficial nature of what standardized tests ask students. “I think we should be using authentic assessment practices,” Reed says. “End-of-year assessments could be developed where you look for opportunities to see how young people used their knowledge in meaningful ways.”

Obama has said that teachers should not be forced to spend the academic year preparing students to “fill in bubbles on standardized tests.” He says he will improve the assessments used to track student progress to measure readiness for college.

Chavez would like to see a reevaluation of teacher qualification—specifically, what it means for a teacher to be highly qualified. Chavez doesn’t believe teacher education programs are necessarily the best way to train a teacher; having people who have a demonstrated proficiency in the subject that they’re going to teach, she says, is vital. “I think we need to be open to thinking more creatively and getting experienced professionals who want to be in the classroom and who want to share their expertise,” says Chavez. “I’m 61 years old, and I might know a great deal about constitutional law and American History, but if I wanted to teach part-time in the public school system after I retired, I couldn’t begin to do that.”

Obama’s Teaching Service Scholarship program will prioritize recruiting math, science, and technology degree graduates, and his Teacher Residency Program can place trained subject matter experts in high-need districts. Obama points to New York’s Math for America as an example of a successful program that “helps to build a community of excellent teachers to serve in high-needs areas.” Though the details of Obama’s teacher scholarship and residency programs are yet-to-be-seen, it is clear Obama has plans to recruit teachers who are not on the standard teacher education program track.

In 2006, the American Federation of Teacher’s (AFT) recommendations to improve NCLB focused on the following four areas:

How many of these recommended improvements will be made is unknown. “NCLB is mostly going to play out in Congress,” Thibault says. “People had hoped it would be at the top of the agenda, but obviously with the economic meltdown, it slid down the agenda.”

Necessary reforms aside, NCLB has had some positive outcomes. “It certainly raised the level of public awareness and opened the doors for a lot of healthy dialogue about what needs to happen in public education,” Reed says. “The recognition at the national level that there are inequities in the educational opportunities was incredibly important.”

It’s critical, Reed says, to recognize that all children can learn and to have some kind of accountability measure to require that we separate data pertaining to student learning. “With some major tweaking and shuffling of the procedures to support the priorities, NCLB could be a good foundation,” Reed says. “Especially in light of its bipartisan support.”

Chavez agrees that though NCLB has not been entirely successful, it represents progress in the right direction. “All you have to do is look at the data to see that there have already been a lot of improvements,” Chavez says.

And parents and educators across the country will no doubt be waiting anxiously to find out the future of this legislation.

What are Obama's other plans for education? Check out Obama on College Funding, Obama on Early Childhood Education, Obama on School Choice, Obama on Math, Science, and Tech Education, and Obama on Teacher Recruitment and Retention.

Next Article: No Child Left Behind: New Issues in Education
We enable strictly necessary cookies to give you the best possible experience on Education.com.Cookie policy