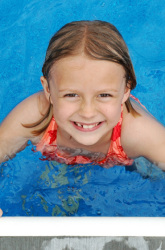 Every year, parents rush to prepare breakfast and pack lunch, hustle their kids out the door, race to school, and hurry from work to after-school activities, play-dates and classes. Summer presents a golden opportunity to slow down, and what do most of us do? More of the same! This summer, give your kids a wonderful gift: an old-fashioned summer.

When you’re tempted to sign your kids up for another extracurricular activity, stop yourself; is it something they’ll really love, or just another “to do?” Many busy parents dread hearing “I’m bored,” but boredom often precedes a burst of creativity. Kids whose days are fully booked don’t have to develop self-reliance or learn to entertain themselves.

Years ago, summer camp was a luxury for the few and summer classes meant the occasional tennis lesson. With more families reliant upon two incomes and college admissions increasingly competitive, long summer days lazing in the backyard have become the luxury. You may not be able to supervise an entire summer of freedom, but do take as much time as you can to:

So toss that calendar in the trash-- at least until September. None of the above will round out your child’s resume, but you’ll savor the memories long after summer ends.

Next Article: 5 Sensational Summer Festivals
We enable strictly necessary cookies to give you the best possible experience on Education.com.Cookie policy