Log in with different email
For more assistance contact customer service
School and Academics
Poverty and Equality
One Laptop Per Child ... Including Yours

One Laptop Per Child ... Including Yours 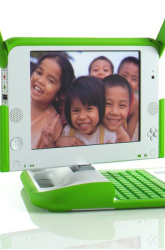 A hundred dollars can get you dinner for two at a fancy restaurant. It can score you an iPod shuffle or a set of walkie-talkies. But can it outfit a child in the developing world with a laptop computer? Well, almost.

The XO laptop has hit the street. Weighing in at just 3.2 pounds, this spill-proof, drop-proof, rain-proof and somewhat alien-esque little number has been the talk of the town for close to three years now, since MIT professor Nicholas Negroponte first announced he was working on it. It’s the laptop of “One Laptop per Child” (OLPC) fame, and while it doesn’t ring in at $100 yet, it’s still a bargain. In an effort to get Americans to donate one of the $200 computers to a child in the Third World, the non-profit has launched a “Give One Get One” campaign, good through December 31st. Give a laptop to a needy child in Africa or Afghanistan, and you can have another one for the child in your own life. In other words, spend $400 and you’ll get both laptops and a $200 tax deduction. Plus you’ll help jumpstart the campaign to give every child in the world access to knowledge, and a modern means of education.

The idea of one laptop per child dates back nearly 40 years to Seymour Papert, an MIT mathematician and protégé of Jean Piaget, the father of cognitive development theory. Since the 1970’s there have been a slew of successful pilot projects, with very positive outcomes, but the movement didn’t really pick up steam until Negroponte scooped up the torch in 2004. The first 1,000 laptops were built for testing and distribution to developers. The second 3,500 units came off the line in early 2007 and went to schools in nine countries: Cambodia, Rwanda, Libya, Nigeria, Pakistan, Thailand, Uruguay, Argentina, and Brazil. High volume production began just a month ago, in November 2007.

The One Laptop per Child movement has its critics, to be sure. “Why give laptops when these kids need food,” is the general thread of the argument. But the two need not be mutually exclusive. And in addition to feeding growing bodies, OLPC contends, we must also help developing nations feed growing minds. “By empowering children to educate themselves, a new generation will ultimately be better prepared to tackle the other serious problems (poverty, malnutrition, disease) facing their societies,” Negroponte says. Unlike giving seeds that may not grow in the harsh climates or poor soil of many of these developing nations, a seeded mind can thrive anywhere, and grow.

The XO has been designed for rugged, third world environments, not your living room. Before you start prepping your kid for a laptop under the tree that can run advanced video games and boot up Microsoft Office, here's a little dose of reality: the laptop runs on Linux, has no DVD drive, and has a small screen by American standards-- just seven inches. But the fact that it was designed for kids in the far reaches of the world means that it has some incredible innovations even a $2,000 laptop can’t match.

Little or no telecommunication infrastructure? No problem. Nudge up its little antennae ears and it can sense other XOs nearby and connect to them instantaneously. Each machine is a wireless router so that all children in a local community can see each other and interact online—adding a paragraph to a shared story, a few strokes to a communal painting, or a drum beat to a piece of music. All kids need to do to interact is press a single button.

Outdoors with laptop in tow? Kids can read the screen in full sunlight as clearly as they could a newspaper, by switching it to black-and-white mode. Away from an electrical socket? No worries. The laptop’s battery charge can last for 6 hours of heavy use, or 24 hours of reading. And in locations without electricity, kids can generate power themselves by either solar or human-powered charging, through pull cords and hand cranks.

There’s a lot of bang for two hundred bucks. A built in video camera (so teachers can send notes home to illiterate parents), a built in microphone, a kid-sized rubberized keyboard sealed against water, dust, and dirt. Plus the ability to edit text, create music, collaborate on games, and make and share movies. The user interface allows kids to take a peek at what activities they and others in their community are engaged in, and to join in those activities, making learning and teaching a social activity.

Sound cool, but still not sure what one laptop can do? Here’s what Kofi Annan, former Secretary General of the United Nations, had to say: “This is not just a matter of giving a laptop to each child, as if bestowing upon them some magical charm. The magic lies within—within each child, within each scientist-, scholar- or just plain citizen-in-the-making. This initiative is meant to bring it forth into the light of day.”

Most of the nearly 2 billion children in the developing world are inadequately educated. One in three does not complete the fifth grade. It’s going to take a lot of monetary muscle to tackle the problem. But this could be the start. To date, donations to the “Give One Get One” campaign have averaged 2 million dollars per day. To add yours to the mix, log onto www.laptopgiving.org, or call 1-877-LAPTOP.

Next Article: What Do Test Scores Really Say About a School?
We enable strictly necessary cookies to give you the best possible experience on Education.com.Cookie policy