When Your Child Refuses to Go to School 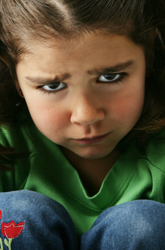 Every day, all across the nation, as many as 1 in 4 children refuse to go to school. But while the reasons can range from a looming test to an ill-placed pimple, “school refusal,” formerly known as school phobia, is an actual anxiety-based disorder. Surprisingly, school refusal is more prevalent than some better known child disorders like ADHD, but, because many children are vague in their complaints and unable to verbalize what's making them anxious, it's sometimes dismissed as typical childhood willfulness. However, the effects of recurring school refusal can be far-reaching for your child's education.

So, where's the line between what's normal and what's not? "You need to look at whether it's affecting the child or family's daily functioning," explains Christopher Kearney, Ph.D., director of the UNLV Child School Refusal and Anxiety Disorders Clinic. In other words, if a child's grades are suffering or a parent's job is in jeopardy from frequent absences, it's time to look closely at the issue. Kearney adds that parents should be listening carefully to children who say they can't go to school because of "vague, untestable kinds of things like stomaches or headaches." While these somatic complaints alone don't necessarily indicate school refusal, there may be deeper problems if combined with general complaints about school, talks of threats at school and chronic absenteeism.

According to Kearney, "there is a subtle difference between school refusal and school refusal behavior." The kid who ditches school to hang out with her friends is exhibiting school refusal behavior, which can be nothing more than a phase brought on by peer attitudes or a sense of rebellion. But the child who clings to her mother's leg, screaming at the thought of having to enter the school building, is showing signs of school refusal, or "anxiety-based absenteeism."

However, the label doesn't matter nearly as much as getting a child back into the classroom. According to Maryann Roth, CAS, a school psychologist and guidance counselor, it's about "making sure the kid gets to school no matter how hard it is." Working closely with school officials and possibly a therapist to create a plan is a necessary step. Here are some key components to creating a successful plan:

Your bottom line? Identify the issue, make a plan and stick to your guns. Once your child has overcome her fear of school, she'll probably thank you.