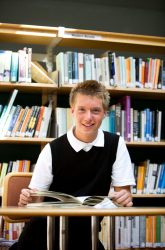 To require uniforms or not to require uniforms: that is the question many school districts are facing these days. Students in many cities are wearing uniforms to school, and parents across the country are facing off over proposals to institute uniform policies. All this fuss over khaki pants and a white shirt?

While private and parochial schools have long required students to follow a dress code or wear uniforms, public schools have traditionally allowed students to wear what they (and their parents) like. Pro-uniform parents say that only worked because schools used to be safer. Now that kids are getting mugged for their designer clothes and expensive sneakers, school uniforms seem a safer alternative to many. Furthermore, uniforms prevent gang members from wearing gang colors and insignia to school, and make it easier for security guards to spot intruders.

Of course, the lack of a dress code isn’t an issue only in high-crime areas. Middle-class students report peer pressure to buy expensive clothing, cliquish behavior exacerbated by differences in what students can afford, and kids wearing inappropriately sexualized clothing that isn’t conducive to studying. Rachel Berman, who graduated from a private high school that required uniforms, says, “the uniforms contributed to a more sedate, professional feel that I think made it easier to focus on school.”

On the flip side, opponents believe uniforms squash creativity and free expression and worry that they could prevent students from expressing their religious or political beliefs. (In fact, the law requires that religious garb like yarmulkes and head scarves cannot be prohibited, and expressive gear like political buttons is allowed unless it interferes with the rights of others, as with gang insignia.) Many schools have an “opt-out” clause for students who choose not to wear the uniform, and most provide free uniforms to those who cannot afford them.

“My two children attend a school with a lower school uniform and I love it,” says Marcia Turner. “Having a specific set of clothes the kids must choose from makes outfit selection a no-brainer. No more fights or discussions about what to wear since that decision has virtually been made for them.”

“You’ll have the popular girls and the nerdier girls with or without the uniforms,” says Daisy Kong, who graduated from a parochial school that required uniforms. Nonetheless, she adds that, “there were days in college where I actually found myself missing my uniform because I didn’t know what to wear and would spend 30-40 minutes shuffling through my closet.”