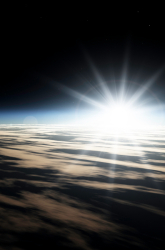 Is there a Trekkie in your house? Does your child hum the theme song from Star Wars in her sleep? Do you have glow in the dark sticker constellations on your ceiling, a telescope in your backyard, and a kid who dreams of a future as an astronaut? If so, forget about traditional summer camps. Who needs kickball and macramé when kids can blast off to space camp?

Space Camp, affiliated with the US Space and Rocket Center in Huntsville, Alabama, is the sleep-away camp of choice for junior astronauts. Kids study science, math and technology, practice eating, sleeping and using bathrooms the way astronauts on missions do, and experiment with the manned maneuvering unit, the “Five Degrees of Freedom” chair, and rocket building. 93% of graduates report taking more science courses after attending camp here; 91% report taking more math courses; and 74% report knowing about more career options.

“It was a great experience, and with a heavy focus on physics,” says Amanda Christine Miller. “I was about 10 years old; 4 years later at Harvard Model Congress I introduced a bill proposing the privatization of NASA, spilt between the private sector and the Jet Propulsion Lab. So Space Camp definitely stayed with me for years!”

Space camp is for 9 - 11 year olds; 7 – 12 year olds attend Space Academy; 15 – 18 year olds earn college credit at Advanced Space Academy. Always wanted to moonwalk? Sign up for the Parent/Child Program. “One year for both my son’s birthday and for my husband’s birthday, I sent them to space camp together. It was a great bonding experience and I believe my husband had as much or more fun than my son,” says Debi Yohn, Ph.D. Programs start at $399 for 3 six-day courses and include all meals, lodging, activities and materials.

The Kansas Cosmosphere and Space Center in Hutchinson, Kansas offers “future astronaut training” based on NASA standards to kids in grades 7 – 10. Campers do actual crew exercises, flight simulation, take virtual space walks and try g-force training. Prices start at $650 for the 5-day sleep-away camp; a day camp is also offered for kids in second grade and up.

Not ready to ship ‘em off? Camp Kennedy Space Center (Camp KSC) just outside Orlando, Florida, offers day camps for second through ninth graders. They’ll have the opportunity to meet an astronaut, try a motion-based simulator, and simulate a space shuttle mission. “My daughter who is now in college went to space camp (Camp KSC) when she was 12,” says Francine Kent. “It was a good experience...especially to see the difference in how girls approached the same problems as boys did.”Prices start at $295 per week.

If your child just can’t get enough of outer space, sign up for one of the spring break, summer or December day camps at Space Center Houston.  Associated with the Johnson Space Center, SCH offers kids ages 3 – 14 opportunities to study engineering, build rovers, and sew space puppets. Prices start at $50 per day.

Traditional? Probably not. But for kids who’d rather study physics than paddle a canoe, there’s no better place than space camp to learn that the sky’s not the limit.

Next Article: Dig History? Try Archeology Camp!
We enable strictly necessary cookies to give you the best possible experience on Education.com.Cookie policy