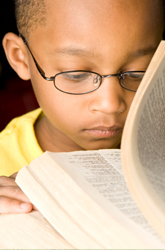 Could you spell "ursprache" after hearing it spoken? How about "serrefine"? If you're reaching for the dictionary, consider that these are the words that won the Scripps National Spelling Bee for its young 2006 and 2007 champions.

These kids know their words. To make it to this year's Spelling Bee finals in Washington, DC, which runs from May 25 to 30, the 288 contestants had to first win spelling bees in their local areas. Sponsorship is available to certain daily and weekly newspapers which serve English-speaking populations. Each sponsor coordinates a spelling bee program for its area, in cooperation with local area schools.

The kids prepare by studying words – lots of them. Spellit!, the Bee's official study guide, focuses on 'only' about 700 words, which are divided into sections according to language of origin. But, as Mark Kroeger, National Spelling Bee Spokesperson, says, "Spellit! will only get them so far as their regional Bees. Beyond that, they dig into Merriam-Webster."

The competition has been around for a long time, and is the nation's largest and longest-running educational promotion. It began in 1925 as a small event sponsored by the Louisville Courier-Journal, with only nine contestants. In 1941, the E. W. Scripps Company assumed sponsorship of the event, and has produced it each year since, with the exception of the World War II years of 1943-1945. Interest in the Bee has built up steadily over the years, and this year's 288 contestants is a record-breaking number. The Spelling Bee has even inspired a Broadway play and "Spellbound", an Oscar-nominated documentary. These, along with ESPN and ABC primetime television coverage, have helped raise public interest in the event.

The kids participating are a diverse bunch, split roughly evenly between girls and boys, with a few more girls usually participating. They come from varied educational backgrounds including public and private schools, parochial and charter schools, as well as a significant number of home-schooled kids. Most participants are in grades 6 through 8, although a number of younger kids also become eligible to participate each year. This year, history is being made as one barely eight-year-old speller became the youngest contestant in the history of the Spelling Bee.

Despite their varied backgrounds, Bee participants do have a number of things in common. Kroeger notes that "most of the kids are very well-rounded, very intelligent. They have a love of language, and in studying it they also learn about science, arts, and medicine [among other subjects]. Serious spellers study root words, and the paths words take through different languages."

Kroeger also comments that, despite many differences among the contestants, "mostly you see young people who are very, very serious about their education, who are grounded at home, and have direction in their lives."

If their journey to Washington DC is any indication, these Spelling Bee'ers are clearly on the path to S-U-C-C-E-S-S.

Find out more about the Spelling Bee at: www.spellingbee.com

Next Article: Photograph Activities for a Chance to Win!
We enable strictly necessary cookies to give you the best possible experience on Education.com.Cookie policy