Is Standardized Testing Failing Our Kids? 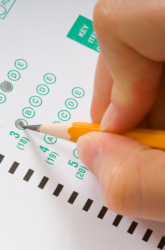 For many families, awaiting the results of a child's yearly test has become just another rite of passage. But the practice of “standardized testing,” whether it's to judge a child's eligibility to advance a grade, or their caliber as a college applicant, is anything but standard issue. It's been hailed by some as the answer to school performance woes, and condemned by others as the very cause of them. The debate masks a larger question: just how do we define what it means to learn something, and how can we test for it?

To many, the notion of standardized testing is appealing: it measures students by a common yardstick, holds teachers accountable for results, and helps identify where problems lie. But the temptation to sort the smart from the not-so-smart has had social and cultural repercussions from the get-go. “The modern testing movement came out of the effort at the turn of the last century...to ascertain society's 'mental defectives' and sort them from those of superior intelligence who would occupy society's elite strata,” says Peter Sacks, author of Standardized Minds: The High Price of America's Testing Culture and What We Can Do to Change it and, most recently, Tearing Down the Gates: Confronting the Class Divide in American Education. In other words, because standardized tests are designed by those in a position of power, they can be culturally biased in favor of the “haves” and against the “have-nots.” For example, one of the earliest I.Q. tests administered to World War I recruits showed a tennis court with no net, and asked test-takers to identify what was missing from the picture. Because few people outside of the economic elite has ever seen such a thing before, their chances of answering the question correctly were slim.

Most people these days know what a tennis court looks like, and today's standardized test-makers take pains to prevent cultural bias in their test questions, but other issues remain. Because the current system rewards high-performing schools, and sanctions low-performing ones, many critics of standardized testing say that tests hurt the students who need help the most, and reward those who are already at an advantage. “The testing movement in schools is exacerbating the class and race divide in the education system,” says Sacks.

Increasing pressure on teachers to produce high test scores has also raised concerns. Critics say testing leads to a narrowing class curriculum, since teachers may “teach to the test” instead of exploring topics and approaches to teaching that may not produce results on paper. The flip side of the argument? Wayne Camara, Vice President of Research at The College Board, says the quality of schools affects testing, too. “Success on tests in school is highly related to the quality of education that kids get,” says Camara. It's no wonder that this chicken-and-egg conundrum has parents, and policymakers, confused as to what to do.

Enter a new trend in testing. While millions of school-children sharpen pencils in preparation for year-end state tests, a different method has students building, drawing, collaborating, and experimenting. It's called “performance-based assessment,” and it's based on the idea that kids should be evaluated based on what they can do, not their potential, or “aptitude,” for future success. “It's much more grounded in the application of what kids can do and what they know,” says Ann Cook, co-director of Urban Academy, a uniquely structured high school operating within New York City's public school system. “It allows kids to really use their skills and their creativity, and embedded in performance assessment is all the skills that kids need to move on.”

Urban Academy, whose student body is comprised mostly of minority and at-risk students, has a staggering 97% graduation rate, and most students go on to four-year colleges and universities. The school takes an egalitarian approach to learning, where teachers and students create an environment structured around inquiry and application to the real world. Instead of assessing student achievement through standardized testing, students demonstrate “proficiency” by undertaking a personal project on a specific topic. For example, for a science requirement, a student might pursue an interest in botany to investigate whether soil quality affects plant growth. Cook says that such assessments show how a student uses their skills to approach a problem, while standardized tests only tell you whether a student got a question wrong or right. “Learning is complex,” says Cook. “Assessment should be too.”

But while performance assessment may sound like the solution, the commitment it requires from teachers makes it a difficult sell for larger schools, where educators are already overextended. Standardized testing still presents the most efficient option for schools, and provides important statistical evidence for student strengths and weaknesses.

So what's the answer? According to Cook, an essential uncertainty over what defines successful learning lies at the heart of the issue. “People are not really clear what they want kids to do,” she says. “Are we really interested in getting kids to enjoy books and ideas? Because if we are, then we should be doing some different things. But if we're not interested in that, then we'll continue to give kids more of the same.” In other words, until we can decide what we want kids to learn, no method of assessment can tell us what we want to know.