Can TV Lead to ADHD? 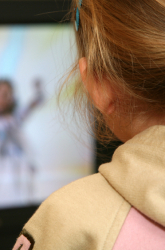 It's no secret that Attention-Deficit Hyperactivity Disorder, or ADHD, is on the rise. Popping up in approximately 2 million children nationwide, ADHD has the makings of a modern epidemic. But the reasons behind the diagnoses are less clear. Is the disorder due to genetics? Diet? Toxins? Or simply too much time spent glued to the tube?

In fact, a growing body of research suggests that watching television during childhood may play a significant role in attention problems, whether for preschoolers or teenagers. And that's not all, says Jeffrey Johnson, PhD., Associate Professor of Clinical Psychology in the Department of Psychiatry at Columbia University. “The evidence is suggesting that there's a whole syndrome of different outcomes related to television viewing, ranging from attention and learning problems to problems related to obesity, aggression, and sleep problems,” he says.

Johnson's recent study, which links frequent television viewing in adolescence to attention and learning difficulties later, found that youths who watched three or more hours of television a day were twice as likely to develop attention difficulties than those who watched less than one hour. The study, which followed children from adolescence to adulthood, found that television viewing was also associated with general poor performance in school, with a lasting impact on a child's education. “What I found quite remarkable,” says Johnson, “was that young people who were watching three hours of television a day were fifty percent less likely to go on to higher education.”

And this phenomenon isn't limited to adolescents. According to Dimitri Christakis, MD, MPH, Director of the Child Health Institute and author of The Elephant in the Living Room: Make Television Work For Your Kids, children as young as a few months old are watching too much TV, and may be developing permanent attention problems. “For every hour of television toddlers watch a day, they are ten percent more likely to develop attention problems at school,” he states. Christakis says that the first three years are a critical window of brain development. And while some activities, such as reading together, going to museums, and singing help support a child's brain development in these critical years, watching television can have the opposite effect.

The reason? Most television programming, even some of the educational variety, features quick edits, flashing images and rapid sequences, as opposed to the slower pace of “real life.” “Our attention is broken up because we biologically have a tendency to shift our attention to changing stimuli, so television tends to take advantage of that,” says Johnson. In other words, the rapid pace plays off our instincts to track fast movements, and serves to “hook us” into the program. “But if viewers get dependent on these rapid changes,”says Johnson, “when they turn their attention to something else, like reading a book, their brain might have difficulty staying focused.” Christakis observed a similar tendency in his study of young children. After prolonged exposure to television, which conditions the mind to expect rapid-fire stimulation, he says that “in contrast, reality is boring."

In other words, when a child's brain gets to gorge on candy, a balanced meal of reading, writing, and 'rithmetic just doesn't look too appetizing. But that doesn't mean that kids can't treat their synapses to a snack now and then. As with all things, moderation is key. Wondering how to get your child to practice restraint in a world of instant gratification? Here are some tips:

Next Article: Help for Hyperactive Kids? A Sensory Integration Approach
We enable strictly necessary cookies to give you the best possible experience on Education.com.Cookie policy