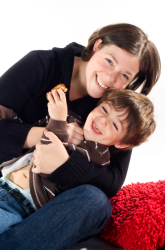 Can a ten-year-old analyze Shakespeare? Write a book? Play all three movements of Vivaldi’s Concerto in D Major?

If you’re a parent with a reluctant learner or a kid who’s just scraping by, listen up. Esquith knows what he’s talking about. He’s got a list of awards that would make your head spin—awards from luminaries as varied as Oprah Winfrey, Queen Elizabeth, and the Dalai Lama. He’s the only teacher in the country to be awarded the president’s National Medal of the Arts. And for the past twenty-five years, he’s been teaching kids that much of America deems “unteachable”—inner city students from an L.A. neighborhood rife with gangs, drugs, and guns.

Most of Esquith’s students live below the poverty line and speak English as a second language. And yet, they score in the top 1 percent on national standardized tests and perform full-length Shakespearean dramas for the likes of Sir Ian McKellen, Michael York, and Sir Peter Hall. Not only do they come ready to learn, but a good deal of his students arrive at 6:30 am and stay until 5—voluntarily.

So what gives? And how can you, as a parent, replicate the magic happening in Esquith’s classroom? Here are 7 cornerstone concepts from Hobart Elementary’s Room 56. Let the learning begin!

Next Article: Definitions/Characteristics of Bullying
We enable strictly necessary cookies to give you the best possible experience on Education.com.Cookie policy