The History of Saint Patrick's Day 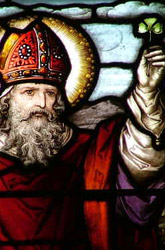 With Saint Patrick’s Day right around the corner, it’s time to check out some of the fascinating lore and tradition that surrounds this holiday celebrated on March 17th every year. Not only is Saint Patrick’s Day the national holiday of Ireland, but it is also widely celebrated in the U.S., Canada, Great Britain, Australia, and New Zealand. Yet many people don’t know the truth about Saint Patrick, including the fact that he wasn’t even born in Ireland!

Who Was Saint Patrick?

St. Patrick was born in Britain around 400 A.D. (or Scotland; accounts vary) to wealthy parents who were Christians. A group of Irish raiders attacked his father’s estate and kidnapped Patrick when he was 16. They took him to Ireland, which at that time was a land of paganism and druidism. Patrick spent six years as a slave, working as a shepherd, very much isolated from other people. During this time he not only became fluid in Gaelic, the Irish language, but he turned to religion for solace and became a devout Christian.

According to Patrick’s writings, after six years he heard a voice telling him it was time to escape, so he traveled south for 200 miles until he reached the Irish coast where he boarded a ship to Britain. He studied under St. Germain, bishop of Auxerre in France, to help combat paganism, and was ordained a priest and given the name “Patercius” or “Patritius” from the Latin, meaning father of his people. St. Patrick traveled back to Ireland to teach Christianity to the Irish. St. Patrick died on March 17, 460 A.D.

What do Shamrocks have to do with St. Patrick’s Day?

In order to make the people understand the doctrine of the Trinity—that there are three beings who make up one divine God: the Father, the Son, and the Holy Spirit—St. Patrick drew an analogy by picking a shamrock and showing that its three leaves were on only one stem. The shamrock was already a sacred plant in ancient Ireland because it symbolized the rebirth of Spring. Shamrocks, of course, are green, hence the stipulation that one must wear green on St. Patrick’s Day!

How We Celebrate St. Patrick’s Day?

St. Patrick’s Day, which falls during the Christian season of Lent, has been celebrated by the Irish since the 17th century. Interestingly, Irish soldiers serving in the English military held the first St. Patrick’s Day parade on March 17, 1762 in New York. In 1848, a group of New York Irish aid societies united their parades to form one New York City St. Patrick’s Day Parade, the world’s oldest civilian parade and the largest in the county, with more than 150,000 participants featuring Irish music, dance, and more. Other cities including San Francisco, Chicago, Philadelphia, Boston, Montreal, Vancouver, and Sydney, also hold annual St. Patrick’s Day parades.

Irish music is also very much a part of St. Patrick’s Day and Irish culture, as the Celts had an oral culture, where religion and history were passed from one generation to another in the form of songs and stories.

Get in the Irish spirit with your child this Saint Patrick’s Day, and learn a little about the green jewel of the Atlantic, with this short round of trivia:

Answers
Next Article: Why Teach History?
We enable strictly necessary cookies to give you the best possible experience on Education.com.Cookie policy