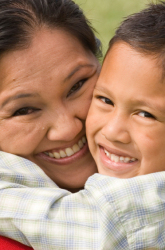 Did you hear the one about the class clown who giggled her way to better health, a happier life and stronger relationships? A sense of humor is “healthy and healing physically, emotionally and cognitively,” says Steve Sultanoff, Ph.D, past president of the Association for Applied and Therapeutic Humor. In fact, research indicates that laughter may lower the stress hormone serum cortisol, while helping people build resilience and connect with others.

So, you’re not Seinfeld. Can you still help your child develop a strong sense of humor? Of course! “We have a certain potential for humor that we are born with but that potential is hugely influenced by the environment,” says Sultanoff. Kids whose parents giggle at their jokes and act silly tend to grow up into adults with the capacity to enjoy a joke.

Don’t bring out those Saturday Night Live videos just yet. Ted Rubenstein, PsyD, Assistant Professor at the Chicago School of Professional Psychology and Clinical Director of the Institute of Therapy Through the Arts, says that humor is developmental. According to Rubenstein, the stages are: “slapstick for ages 4-7, incongruity and farce for 7-11, sarcasm and comedy 11-16, and beyond 16 satire.” Don’t worry if your child isn’t fitting perfectly into this mold; the point isn’t that everyone’s sense of humor develops in the exact same way, but that we all use humor to diffuse tension.

“Humor is a way of responding to events that might appear in contradiction, threatening or complicated,” says Rubenstein. So when your preschooler falls on the floor and laughs or your high-schooler mocks a romantic rival, they’re probably using wit to help understand challenging subjects, whether motor skills or social ones.

“There are rules of humor that have to be taught,” says Rubenstein. “…Remember to keep everyone in on the joke and teach that as a ‘good sportsmanship’ rule.” Most children intuitively sense this: they laugh when the cartoon character falls down because they know he didn’t really fall down and get hurt. Teasing is only funny when it’s good-natured and appreciated. Context counts, too: jokes in the cafeteria are appropriate, jokes during a teacher’s lecture are not.

The best way to help your child reach his comedic potential? Tell age-appropriate jokes, act silly, and get him giggling. Encourage your child to tell jokes by laughing to build the budding comedian’s confidence, and let her see you kidding around with others. Television probably won’t help anyone sharpen their comedic chops. “On TV humor is ‘handed’ to us and only rarely is it funny,” says Rubenstein. “But it is entirely passive, so we are not doing the work of development, we are just recognizing someone else’s humor.”

And that’s no laughing matter.

Next Article: The Best Board Games for Every Age
We enable strictly necessary cookies to give you the best possible experience on Education.com.Cookie policy