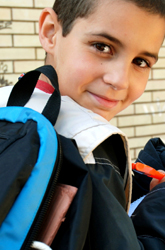 The school year's coming fast. We’ve done the comparison-shopping, so you don’t have to! From pencils that never need sharpening to cell phones that shut themselves off during school hours, here’s some loot to make your kids smile on their way to the bus stop.

If that old picture of you in rainbow legwarmers makes you cringe, take heart. Everything old is new again. Retro is hot, and it’s made its way into this year’s school supplies. Even the Trapper Keeper is back. That’s right, 80’s geekdom just became millennial cool. It also happens to be a great way to keep notes neat and tidy with colored dividers, lots of pockets, and a vinyl embossed spine that even the family Saint Bernard can’t chew through. The Trapper has a clear plastic pocket on the front, so kids can create their own covers with photos, magazine clippings, and drawings. Rad. (Mead Trapper Keeper, $6.99)

Get your kid one of these pens and they’ll be begging you to let them take notes in class. In a nutshell, the Fly Fusion is a pen and scanner in one. The pen can write like a regular old ballpoint, but it can also read 70 images per second off the specialized paper in the included notebook. So kids can scribble to their heart’s content, then upload their handwritten notes and instantly convert them into digital files or emails. Plus, the pen can download MP3s, translate words into French or Spanish, and spell check an essay on the fly, as you write it. The inside flap of the notebook has a calculator and scheduling tool built in--with just a few taps, kids can score quick calculations, or jot down a reminder about that looming essay assignment. (Leapfrog Fly Fusion, $79.99)

The adult world rarely calls for pencils, but in school, they’re still a part of everyday reality. Say goodbye to broken tips during that dreaded bubble test. Manufacturers are getting the point. The Pentech Ultasharp pencil looks and feels like a standard issue, but works more like a ballpoint pen. It never, ever needs sharpening. Liquid graphite makes for smooth scribbling, and your standard eraser can rub out the results in a snap. (Pentech Ultrasharp Pencil, $3.49 for a pack of three)

For a middle schooler, getting organized is anything but kids’ stuff. Just when they were getting nice and cozy as the kings of elementary, it’s time to make the leap to middle school. There’s a great way to prepare them for the juggling act ahead and it doesn’t take fancy laptops or glitzy gear, just a good old-fashioned planner. The BusyBodyBook, an organizer with a clear, kid-friendly layout and plenty of space, allows lots of personalization. Your child can plan her day class-by-class and extracurricular-by-extracurricular and still have tons of space for random jottings. All this inside a whimsically dotty cover that will leave adults craving some organization of their own. (Academic BusyBodyBook Organizer, $16.95)

To cell phone, or not to cell phone, that is the question. Well, this just might be the answer you’ve been searching for. The Disney mobile puts parents in the driver’s seat, letting them set the days of the week and even the hours of the day the phone can be used. Emergency? No problem. Parents can program “always on” phone numbers like home or 911 so even though the phone is “off” kids can get through if needed. Plus, when your tween comes in moaning that he’s lost it again, you can use the Global Positioning System to find it in the couch cushions. (Disney Mobile Phone, $19.99; plans starting at $24.99 per month)

Loot for Their Locker

Send them to school with something to turn their locker from institutional to inspirational. Magnetic Poetry has expanded its line to include not just the perennial poetic favorite, but also quirky additions like Storymaker, which lets kids throw together a mish-mashed fable before homeroom, and the Homework Excuses kit, which equips them with interchangeable options like “true story”, “alien abduction”, “caught on fire” and dozens of others. Our favorite? Mixed Up Movie Lines, which allows teens the opportunity to tweak “May the force be with you” into “May a Royale with cheese be with you”, amongst other things. (Magnetic Poetry sets, $5.95)

There’s nothing quite like covering text-books in drab brown paper to take the fun out of school work. Slip your kid’s textbook into something more comfortable, with Book Sox stretchable fabric covers. Our favorite? The Hot Sox, which changes color at the touch of a child’s hand. Destined to be a back-to-school hit, these super-cool, heat-sensitive sox have your child’s textbooks covered. (Hot Sox Book Sox, $3.69)

Get your kids thinking re-usable, rather than disposable. Say no to the plastic water bottle and slip one of these into their backpacks. Not only will it keep them hydrated, but the aluminum bottles will put your fears of leaching plastic water bottles to rest. From cars and dinosaurs to surfing or Sponge Bob, Indian inspired, to sleek and simple, there’s something here for everyone. And kids can go online and design their own swigger. www.mysigg.com (SIGG bottles, $7.99-$18.99)

I’m a sucker for Post-It notes. I line them up around my computer screen like flags at the UN. But Post-Its aren’t just for adults. They have a line of stickies called Page-Marker that’s great for helping kids get a handle on their schoolwork. The pre-printed reminders like “Study”, “Where I left off”, and “On the test” mark things so students can find that ever-important fact or teacher comment the night before the big test. There’s also a Flag-Highlighter pen that dispenses refillable sticky nubs to mark the most important pages. The glittery pen, in fun colors like bright lime and grape purple, turns the ho-hum act of highlighting into something of a fashion show. (Post-It Page-Marker stickies, $3.69 for a pack of three; Post-It Flag-Highlighter, $4.99 for a pack of two)

The coolest calculator on the block opens like a clam and looks almost like a mini laptop. Teens can tout their own style by applying a “skin”—a vinyl adhesive that cloaks all that geeky silver in sleek retro fish. Looks aside, this graphing calculator allows students to solve problems from pre-algebra to calculus: equations can be entered and viewed exactly as they’d appear in a textbook. There are enough icons and advanced options to make your head spin, but don’t worry, your teen probably won’t even blink. (Casio Graphing Calculator FX-9860G Slim, $99.99)