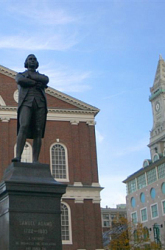 Whether your children are five or fifteen, they’ll find something to inspire them along the Freedom Trail, a 2-1/2 mile long walk that snakes through historical Boston. Marked with red brick and red paint, the walk reads like a “what’s what in Revolutionary War History.” Many of the sites are open to visitors, and with something to appeal to everyone, your walk could take an hour or a week, depending on the antsy-ness of your children. Start at the Greater Boston Convention and Visitor Bureau Visitor Information Center on Boston Common, which sells maps and guides year-round. Founded in 1634, Boston Common is the country’s oldest park and home to winter ice skating and the Public Gardens, where swan boats paddle along in summer and the Make Way for Ducklings Statues beckon. Nearby, you’ll find the State House (home to a five-foot-long “sacred cod”) and the site of John Hancock’s home, which has long been torn down. Keep moving and you’ll pass historic churches, graveyards, and a statue of Benjamin Franklin at the original site of Boston Latin, America’s first public school. Don’t miss the Old South Meeting House, where Sam Adams and Josiah Quincy inspired crowds to throw the Boston tea party, and where Phyllis Wheatley, America’s first female African-American author, worshipped. Pause outside the Old State House to see the balcony where the Declaration of Independence was first read aloud on July 4, 1776. At the corner of Congress and State Streets, you’ll find a star marking the site of the Boston Massacre, a 1770 riot that ended with three colonists dead at the hands of British soldiers. Getting hungry? Faneuil Hall and Quincy Market bustle with shops and restaurants.  When you’ve had your fill of snacks and souvenirs, take a tour of Paul Revere’s house and gape at the steeple of the Old North Church, immortalized in Longfellow’s poem for signaling “one if by land and two if by sea” that the British were coming. Boston is a seaside city, and the USS Constitution, otherwise known as “Old Ironsides,” still floats in its home at the Charlestown Navy Yard. Tours are free and stroller friendly. End your walk at Bunker Hill, where the first real battle of the Revolutionary War was fought. Marked with a monument, this is where (rumor has it) Colonial soldiers were warned not to fire “until you see the white of their eyes.” Boston has an amazing way of bringing America off the page and into the heart. Start your kids early! This is just a sampling of the sights available along the way. There’s more history packed into these 2-1/2 miles than there is in most textbooks, so grab your walking shoes and get going! For more information, visit www.thefreedomtrail.org